Bearish on the stock market.

Bearish on the economy, which is now in recession.

You should know by now that US gross domestic product has delivered negative growth for two quarters in a row. That’s the quintessential recessionary indicator.

Those who need you to believe otherwise are trying to change or make up new definitions.

Data out on August 2 from the US Bureau of Labor Statistics’ Job Openings and Labor Turnover Survey (JOLTS) showed job openings fell by 605,000 in June from 11.3 to 10.7 million. That’s the third-worst drop on record.

And those are the well-known names.

With the National Federation of Independent Business showing small business owners having the lowest expectations ever, you can bet they have an itchy firing finger.

“The housing market is still strong,” is another quip to avoid recession admission. Is it though? We just saw the biggest drop in average new home prices since 2008 and the second-largest drop in 50 years.

Existing home sales have dropped by at least 5% for five consecutive months. 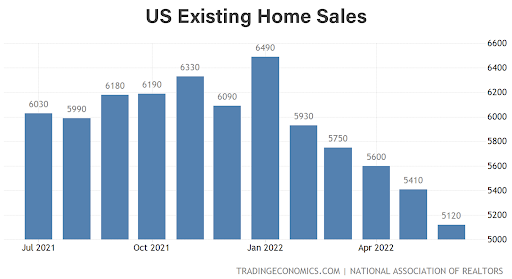 And the yield curve on treasuries remains inverted and continues to get worse. The 10-year - 2-year spread is now more negative than it was ahead of the dotcom crash and global financial crisis.

Does that mean the much-ballyhooed ‘Fed pivot’ is coming?

We’ll likely find out when the financial string-pullers meet later this month in Jackson Hole — where the median listing price for a house is still $3,000,000. The topic of their Mecca migration this year: "Reassessing Constraints on the Economy and Policy.”

Hike, and it’s more layoffs and higher unemployment. Pivot and it’s high inflation for longer. Given their propensity to do the wrong thing at the wrong time, eg., hiking into a recession, I’m not convinced a pivot is at hand quite yet, which is why I remain in “defensive capital” mode.

You can see exactly how I’m positioned here.

Yes, I know stocks have been rallying since June.

Then it rallied 26% from there, climbing to 945 in January 2009. Many “the bottom is in” calls were made. There was lots of talk being overly pessimistic. After a great acting job, the S&P then took its final bow, plummeting 29% to 667 from January to March 2009 — which we now know was the final bottom.

The rally you’ve seen since June of this year only totals 15%.

They say those who cannot remember the past are condemned to repeat it.

The economy and stock market are facing many headwinds that have yet to be priced in.

And I expect them to create more turbulence as summer comes to an end rather than the soft landing they’d like you to believe is possible.

Here’s how to be careful with your capital.