Invest in the Coming Lithium Shortage

There are a few problems with lithium, actually — on both the industrial and investment sides.

First and foremost is that not enough of it is being produced. In the next eight years or so, the world will need nearly five times more lithium than was produced in 2022. And even if all planned new sources come online there will be a half million tonne shortage in 2030.

The reasons for this are straightforward: the world is using more and bigger things powered by lithium batteries.

And lithium powers them all.

Electric cars will soon dwarf all of that.

According to his own announcements, Elon Musk will be building 20 million Teslas a year by 2030.

To meet that goal, he says he will need the world’s entire lithium supply... and then some.

All of it. None left for any other electric car manufacturers. None left over for phones or the laptop I'm writing this on.

There is no alternative. New battery technologies and recycling won’t make a dent for at least another decade.

It's one of the reasons Tesla has been buying up natural resources left and right. It’s also why Musk says that his company might directly enter the lithium mining and refining business.

During a recent earnings call, he told all of Tesla’s investors that lithium was so essential that it’s unstoppable. And then he said, and I quote: “You can’t lose, it’s a license to print money.” 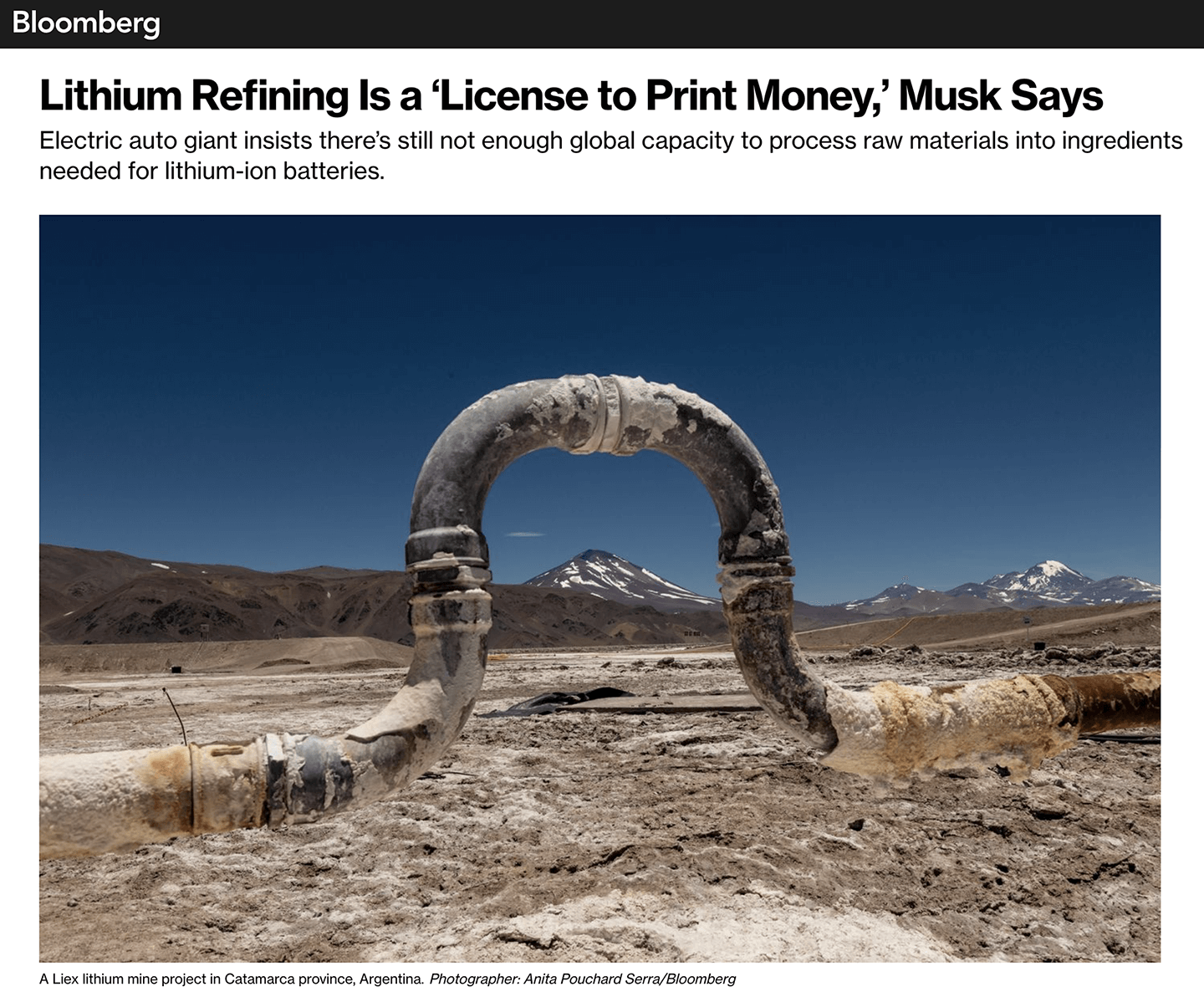 Whether he buys it in the market or gets into mining himself… either way he’ll be vying against many competitors for scant supply, which is already sending lithium prices through the roof.

Because Mercedes, BMW, Ford, GM, Kia, Hyundai and others all need batteries for their electric cars, too.

So does Warren Buffett, who has a multibillion-dollar stake in China's BYD, which also has ambitious battery and electric car plans.

But where will it come from and how can we make money from it?

That's the other problem with lithium.

The lithium market is currently tiny in relation to other commodity markets. Annual sales of lithium in its various forms — pure lithium, carbonates, hydroxides, concentrates, etc. — total around $1 billion. And the majority of  production comes primarily from five large companies:

The public companies on that list aren’t pure plays, leaving investors looking for a way to play this up-and-coming market.

There are several companies in various stages of developing new lithium-producing assets.

Others are simply acquiring land packages that are many years off from production — if they produce at all — so the rising lithium tide can lift their boats too, which is the same thing that happened in the rare earth run a decade ago.

Investors made a lot of money in the rare earth boom. They also lost a lot by betting on the wrong companies.

The lithium market today looks just like the rare earth market in its early days.

Many gains will be had in the lithium sector. But there is much risk. Tread carefully.

My brand new lithium report will help you get started.