Why Are Helium Stocks Blowing Up?

Why have I invested in helium stocks?

And why am I recommending people take a look at helium as a high risk but very high reward speculation?

The easiest place to start is with balloons.

Because that's everyone's experience with helium. You go and you fill up the balloon for the party. And that's actually been quite expensive, if you haven't noticed over the past couple of years. You can go to fill up balloons and pay $20, $30, $40 bucks really quick, just for some gas that used to be pennies or a couple of bucks.

But helium does much more than fill just balloons. It’s quite valuable to several high-tech industries. And it's very hard to find in economic quantities.

It's also very hard to store because it's one of the lightest elements on the periodic table and it escapes the Earth's atmosphere.

And if it’s not in a natural underground dome or in a tank.. it leaks out of our planet!

Humans have known that helium had unique properties for quite some time. It helped win both World Wars. It helped put a man on the moon.

And it’s behind innovations that save millions of lives everyday, like the MRI.

This is not only because of its lightness. Helium’s inertness and low boiling point also make it a sought after Noble Gas.

All the way back in the 1920s, Congress said, "Well, we've got to start storing this stuff." They put up a big reserve, used it to win the wars, help create the atom bomb, and win the space race.

After the war era, the National Helium Reserve continued to grow… all the way to a billion cubic meters of gas by 1995.  By then, the reserve was proving costly to maintain and was $1.5 billion in debt…

So in a short-sighted move, Congress mandated that it start being sold off 2005. That was completed over the last 15 or so years.

And now commercial sales from the helium reserve have stopped.

Why Do Industries Need Helium?

It's critical for all sorts of modern day technologies...

Helium is blasted into fiber optic cables to insulate the fiber wires, for example, so they don't get nicked or jacked up. And that's obviously imperative for the internet and 5G buildout.

The average MRI needs 30 liters of helium every few months. Otherwise, the magnet will stop working and imaging won’t process. It’s helium that fuels the superconducting of this modern medical marvel.

And helium has all sorts of other uses in hard drives and semiconductors, which there's a giant shortage of right now.

Why Are Helium Prices Rising?

Once the government stopped selling from the helium reserve, which is where commercial enterprises were primarily buying helium from, the price went up.

Today, companies are privately contracting for as much as $700 to $1000 per MCF, which is already a 10-fold increase in just the commodity price in a couple of years.

Why Are Helium Stocks Rising?

You have to relate helium stocks to other small resource markets.

There's just too many natural parallels to rare earth stocks or uranium stocks, where there's not a lot of quality deposits.

Like helium, they aren’t necessarily rare elements, but it's hard to find them in economic quantities. It's hard to store all those materials. They’re all critical to modern and clean technologies. And the list of comparables goes on.

Companies that have started to publicly list have seen a sort of mini boom. Many of them have done quite well.

There's been Royal Helium and Desert Mountain Energy. And both of those stocks have gone up — nearly 3,000%! 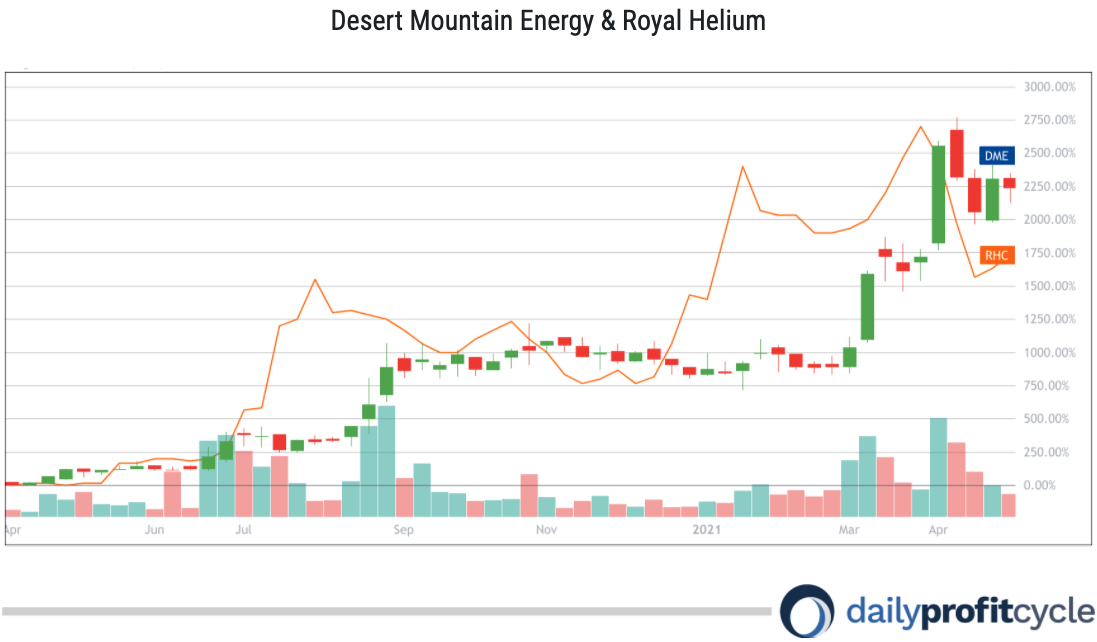 There's another one that went up 3,000% called American Helium that doesn't even have a website that works. I don't even think they're in the helium industry anymore.

There are so few companies that if you can actually do a real deal — also like uranium — you've got a shot at a great speculation if the company can keep the share structure intact and do what they say they are going to do.

Because the race is on for helium across the world.

And not just the world.

Billionaires like Jeff Bezos, Elon Musk, and Richard Branson are even looking in outer space for a certain kind of helium. Because it's also one of the keys to making fusion work.

So helium is in very high demand and short supply, which is a fundamental recipe for higher prices. And it looks like it will stay that way for some time, allowing investors time to reap rewards.

It's an opaque market. There's no spot market.It's all private contract, if you can. The helium market is like an oligopoly in that there's only Linde and Praxair and Air Products.

So if you can find an economic deposit, you can contract to those people at opaque terms and make a lot of money. Or sell the company outright. This is also reminiscent of uranium investing.

I started looking for deals in the space and came across one that was doing things right on the geology and engineering side and also on the capital market side.

I invested in it privately, before it started trading. And so did members of the Hodge Family Office. It only recently started trading, and we've already been up as much as 60% in the first few days of trading.

Expect to be hearing more about helium from me as this market and opportunity develops.