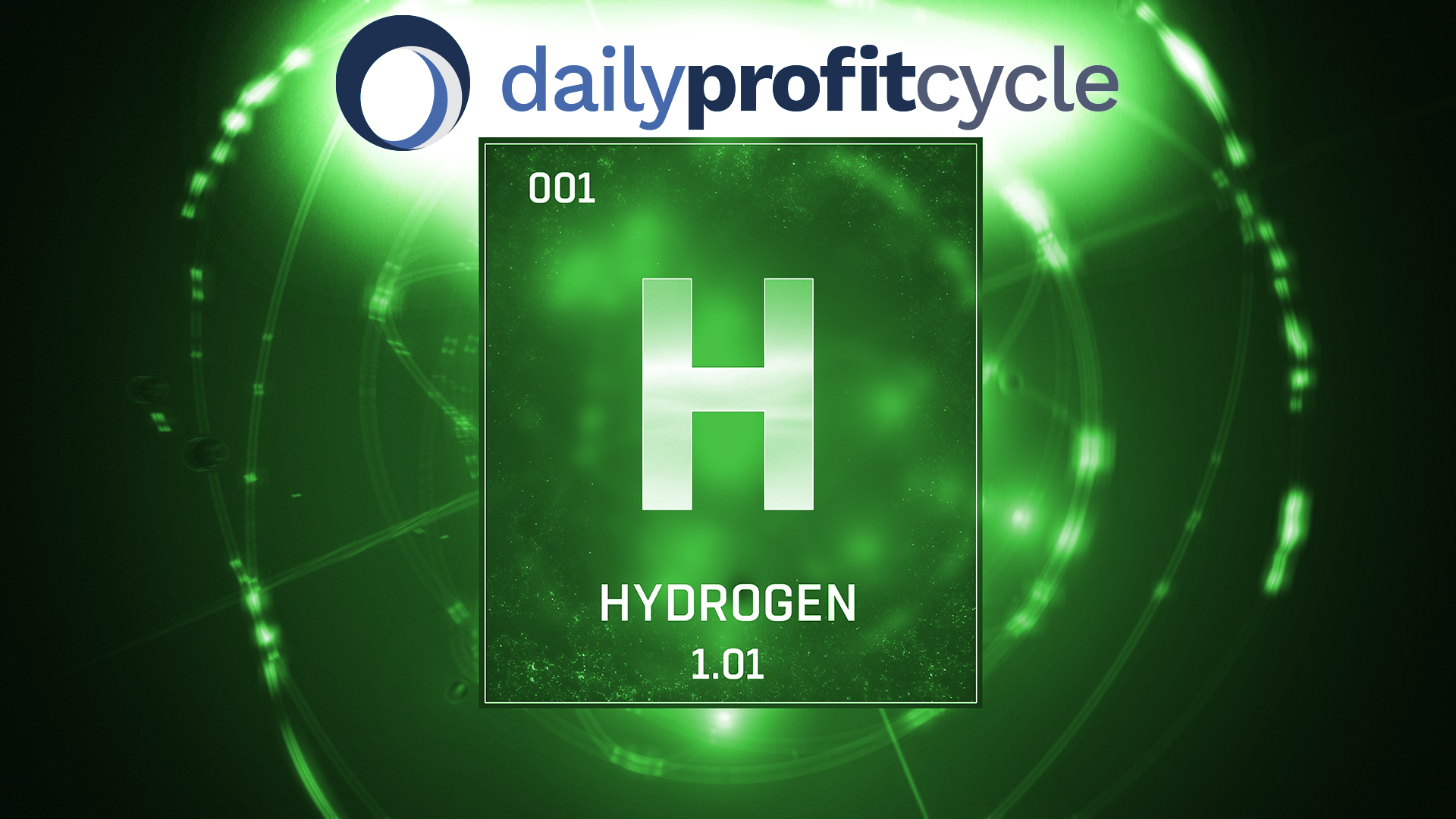 In the last year, Texas froze over, California burned, and almost 3 million people worldwide died from a viral pandemic of exotic animal origin. One couldn’t ask for more obvious signs that something is seriously wrong with the environment.

Indeed, almost every scientist in the world agrees that we need to get to net-zero carbon emissions by 2050 — or things will get worse still.

Of course, that’s easier said than done — especially when many low-carbon energy sources are less than reliable. Texas’ catastrophic 2021 blackouts were caused not only by a cold snap, but also by natural gas and wind generators going offline due to bad weather and poor planning.

Yet until recently, there has been very little public discussion of the one zero-emission energy source which is so resilient that it works in outer space.

The Apollo astronauts went to the moon and back using hydrogen power — specifically, a hydrogen fuel cell that used the gas to generate all the electricity and water the crews needed. 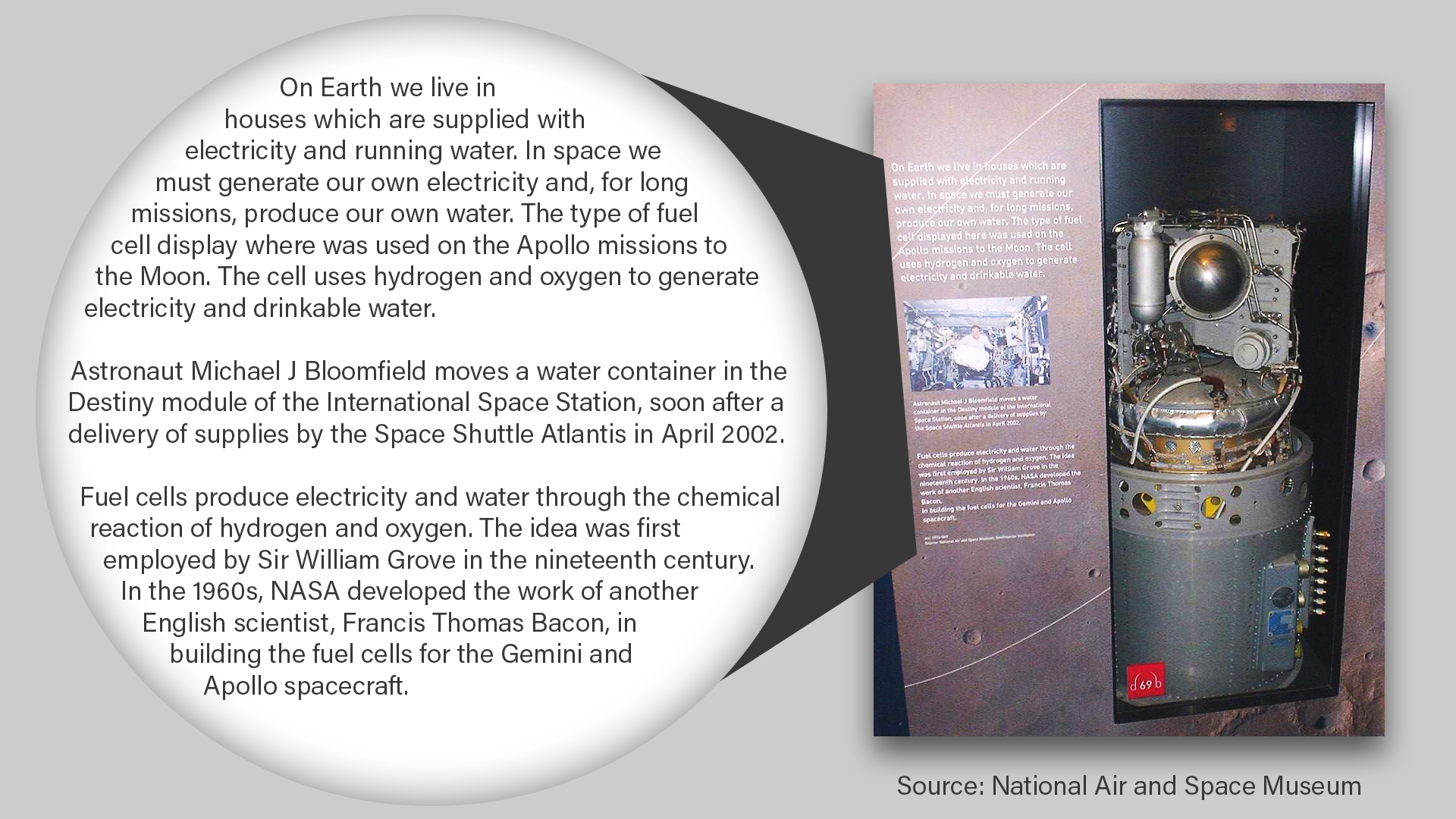 Hydrogen power is cheap, safe, reliable, and completely clean. The only problem is that the production of the gas itself tends to be quite dirty.

More than 90% of the hydrogen produced for industrial use today is a byproduct of natural gas processing — and that process releases nine parts of carbon dioxide for every one part of hydrogen gas produced.

Governments and energy companies are starting to realize that we can’t stop climate change without hydrogen — or with dirty hydrogen. That’s why they’ve started to promote green hydrogen — hydrogen produced through carbon-neutral methods like electrolysis (the use of electricity and chemical catalysts to separate water molecules into hydrogen and oxygen gas).

Grand View Research estimates that investments in green hydrogen will see a compound annual growth rate (CAGR) of 14.24% through 2027, and it’s easy to see why. National and supernational governments are starting to aggressively subsidize the technology…

How Green Hydrogen Is Taking Over The World

Perhaps the most on-the-nose example of how governments are warming up to green hydrogen is found right here in the U.S.

President Biden campaigned on a more ambitious environmental agenda than his predecessor — but he stated few things as explicitly as his support for a big boost in green hydrogen sales. This screenshot is taken directly from his campaign website: 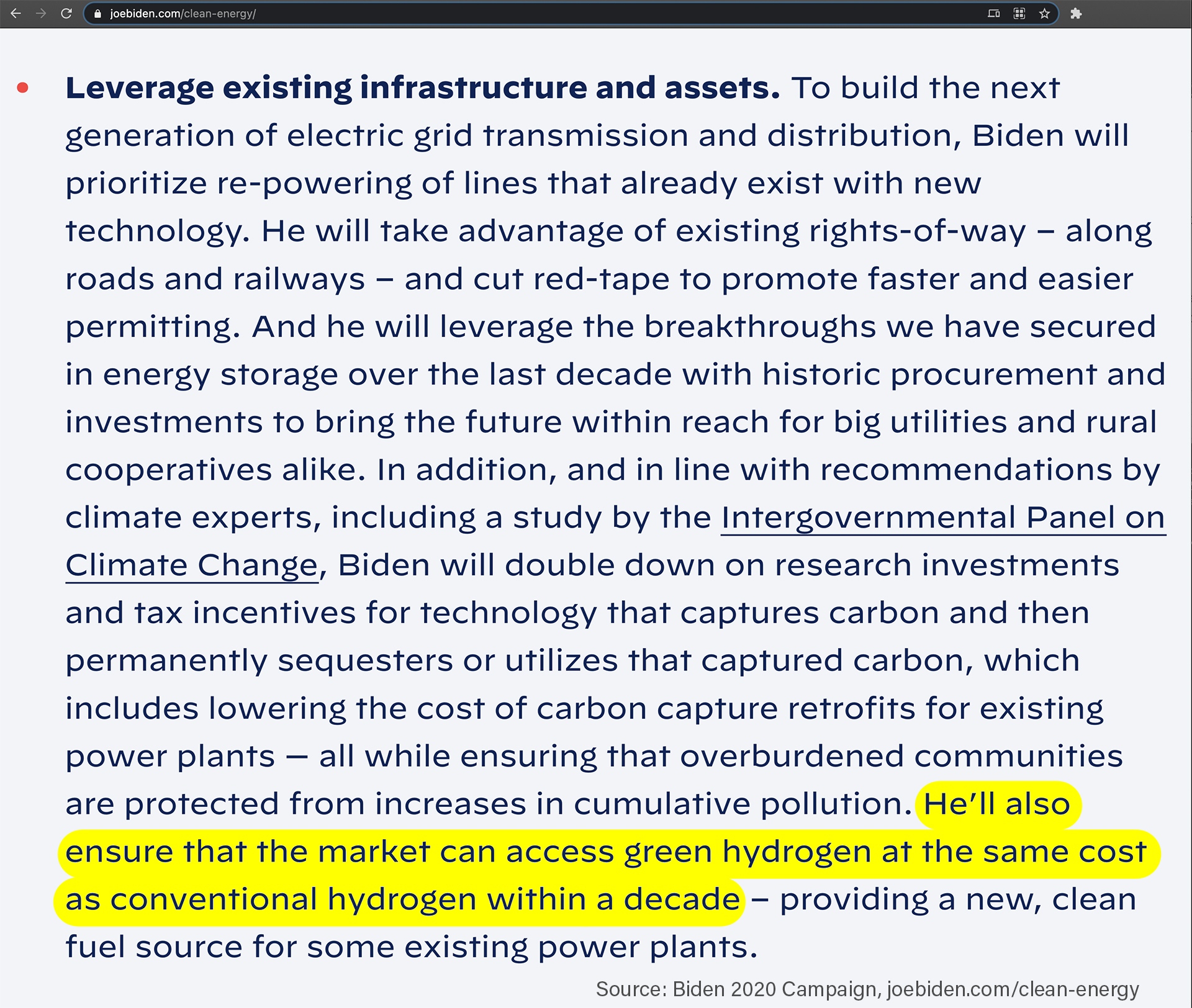 “Ensuring that the market can access green hydrogen at the same cost as conventional hydrogen” sure sounds like code for a subsidy to eliminate any cost differences between the two — or, in other words, a possibility of direct government payments to green hydrogen producers.

They have even bigger green hydrogen ambitions across the pond; the European Union’s climate policy leans heavily on hydrogen-powered transportation.

Germany in particular already has several hydrogen trains and dozens of hydrogen buses operating in its largest cities. H2 Mobility, a private company, is currently building a transit infrastructure of more than 100 hydrogen refueling stations across the country to support these initiatives.

Those stations will use a lot of hydrogen — and the EU is aware that with today’s dominant production methods, that hydrogen will generate a lot of carbon emissions.

That’s why the EU recently announced a hydrogen strategy that calls for the installation of at least 6 gigawatts of green hydrogen electrolyzers within the bloc by 2024 — and at least 40 by the end of the decade.

Even the United Nations is bullish on hydrogen — and it recently implemented a global regulatory change that will cause demand for the gas to surge.

Aside from its transit and electricity-generating applications, hydrogen is also an important input in oil and gas production. Refineries use it to lower the sulfur content in fuel products — and refinery demand for hydrogen has been growing for years. 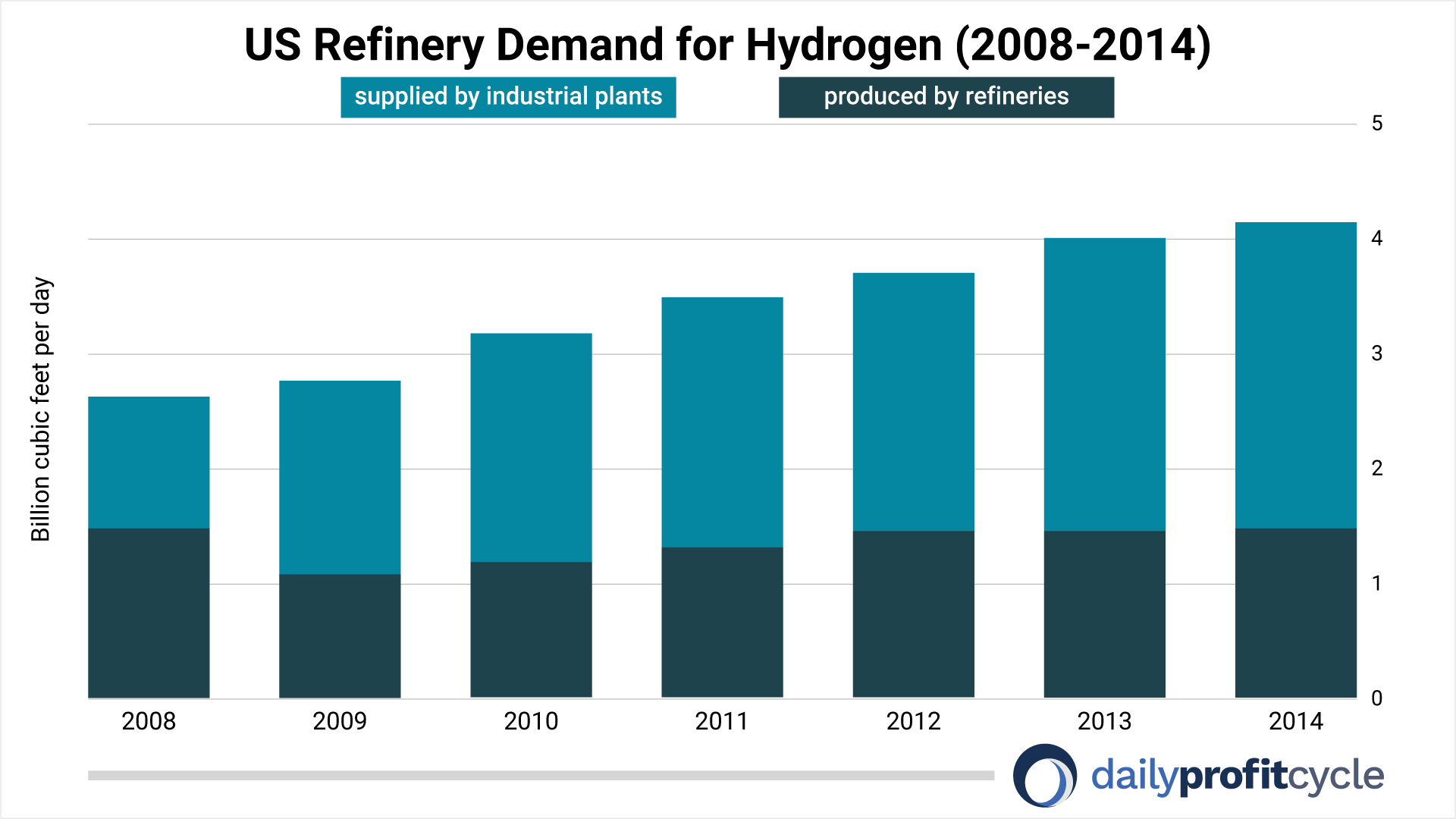 In 2020, the UN’s International Maritime Organization (IMO) implemented a new rule lowering the maximum permissible sulfur content in maritime fuel from 3.5% to 0.5% in an effort to control carbon emissions and acid rain.

The rule change is having profound impacts on the global shipping industry, which uses more than 4 billion barrels of oil a day — more than is produced by Canada, Iran, or Kuwait.

That’s a lot of oil that will need to be desulfurized — and if the UN has any sincere interest in reducing carbon emissions with the IMO 2020 rule change, it’ll encourage refiners to use green hydrogen to bring maritime fuels into compliance.

As you can see, the U.S., the EU, and the UN are all pushing investment in green hydrogen. But you might be wondering — how does one actually buy into it?

How to Invest In Green Hydrogen

There are a number of different ways investors can support the growing role of green hydrogen in the clean energy economy — but perhaps the most well-known hydrogen investments are fuel cell stocks. 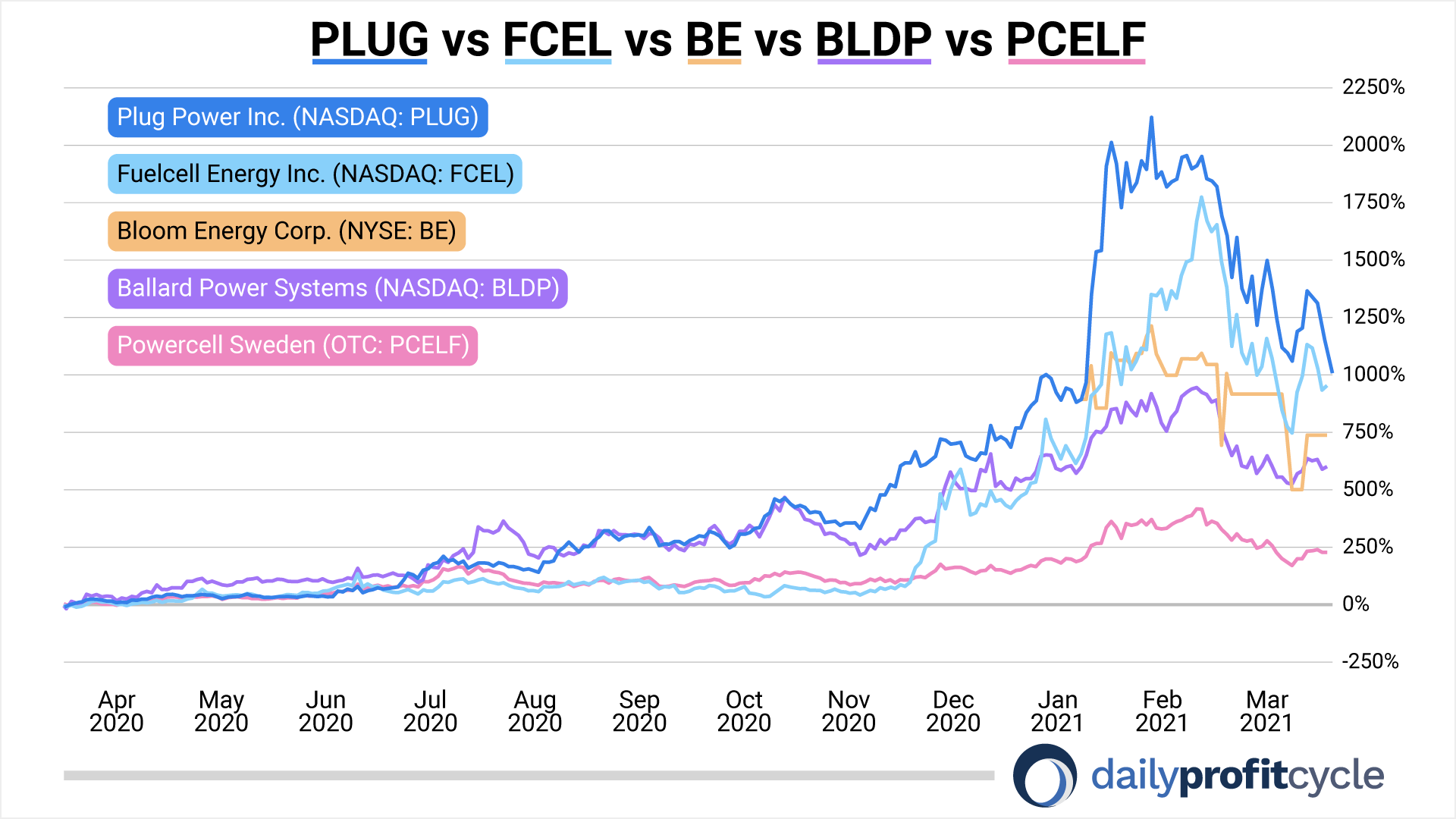 This kind of extreme volatility is a given among fuel cell stocks — and more broadly among consumption-side green hydrogen companies.

And that’s not inherently a bad thing. As you can see from the graph above, Plug Power investors had a chance at 1,500% gains last year — if they knew exactly where to buy and sell. These sorts of investments can be workable with the help of an expert who knows the industry well enough to recognize important signals before the retail investor mob does.

(Incidentally, Nick Hodge is one such expert, and his Daily Profit Cycle subscribers have already banked many generous gains on such signals. To learn more, click here.)

But if you’re looking for a more reliable strategy — one that can both protect and grow your capital, generating income as well as capital gains — then consider investing in green hydrogen producers.

The three we’re profiling below are each established chemical engineering firms with wide moats and considerable resources to throw at the green hydrogen revolution — and they all sport generous dividends and down-to-earth valuations, in contrast to the fuel cell upstarts.

In fact, the first green hydrogen stock we’ll discuss in this report is one of the world’s largest chemical companies…

Founded in 1879 and based in Guildford, England, Linde is the world’s largest industrial gas company by market share and revenue.

It is a founding member of the Hydrogen Council, a consortium of 92 companies with a long-term vision to develop the green hydrogen economy — and has been making big investments in green hydrogen production for years.

In 2015 it opened Energiepark Mainz near Frankfurt, a 6-megawatt green hydrogen electrolysis plant powered by its own dedicated wind turbine farm.

And in January of 2021, it announced plans to build, own, and operate the world’s largest proton exchange membrane electrolyzer for green hydrogen: a 24-megawatt electrolyzer at the Leuna Chemical Complex near Leipzig.

In addition to being one of the largest players in green hydrogen globally, Linde as a stock presents investors with a balanced mix of growth and value. 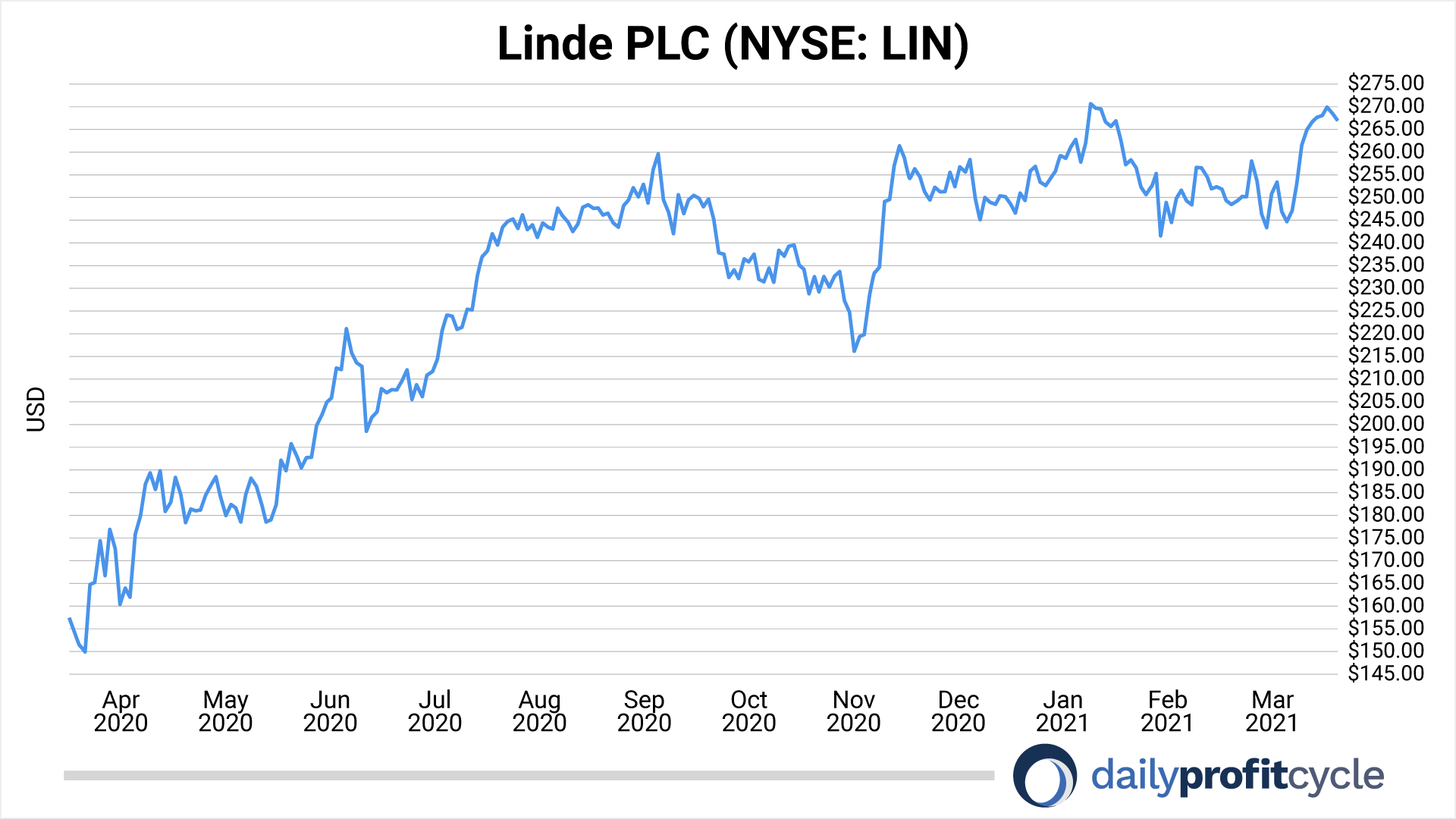 The firm has grown quarterly earnings per share (EPS) by more than 50% year-over-year — and its forward price-to-earnings (P/E) ratio is just half of its trailing P/E ratio, implying more earnings growth ahead.

That honor goes to Allentown, Pennsylvania-based Air Products and Chemicals, an industrial gas firm that opened its doors in 1940.

Air Products grew into the world’s leading hydrogen producer through a series of strategic acquisitions in the last 30 years — and it has been proactive in forming green hydrogen supply relationships during that time.

Financially, the firm is a portrait of stability. It’s profitable with a reasonably-low P/E ratio for the hyped-up hydrogen sector, and a manageable debt-to-equity ratio of just under 62%. 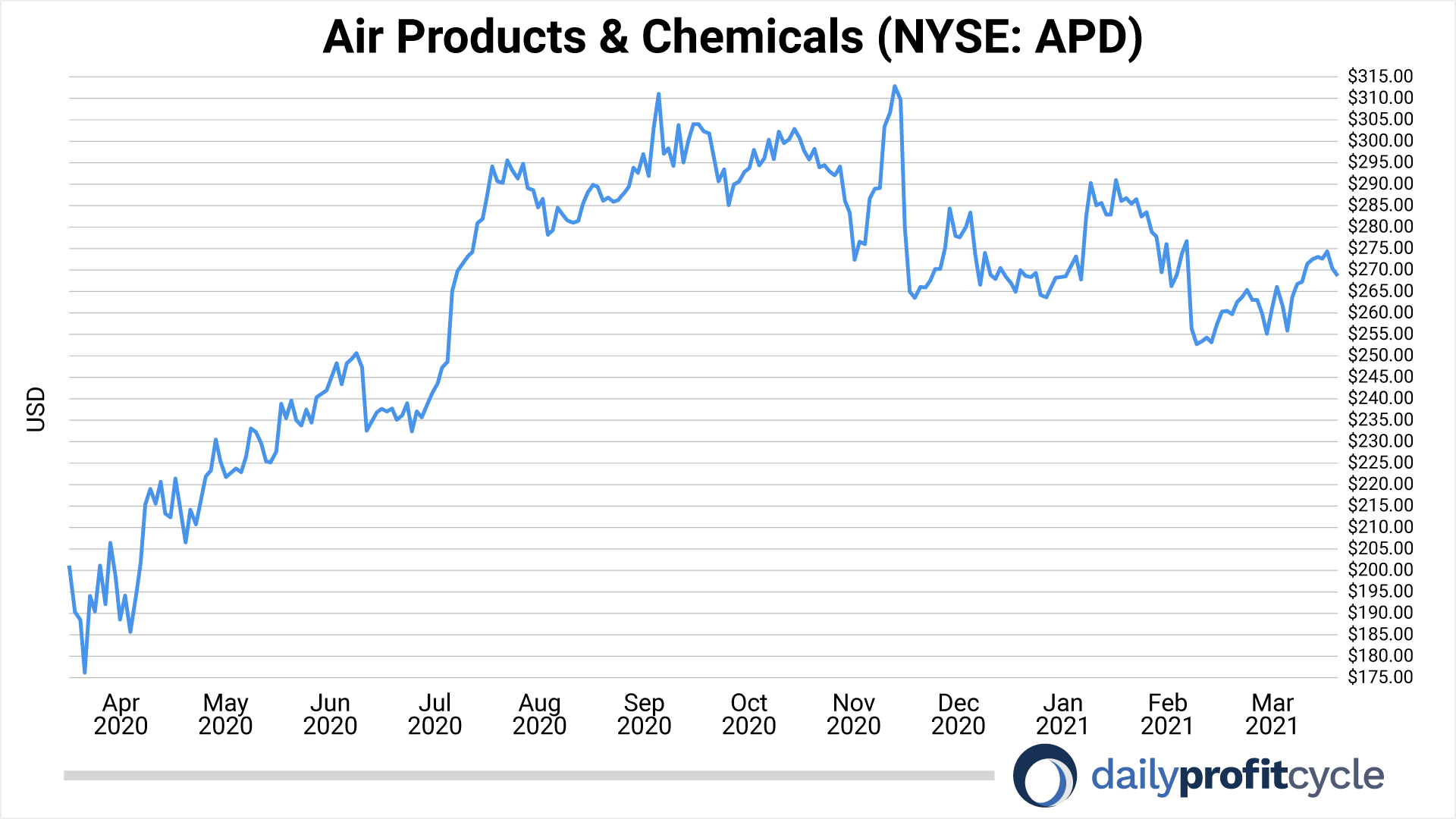 It also pays a $5.36 dividend per share — currently equal to a 2.03% yield — that is safeguarded by a low dividend-to-earnings payout ratio of just 63%.

Both of the firms we’ve discussed so far are established players in the gas production industry with entrenched relationships and wide competitive moats. This gives them more stability than upstart fuel cell stocks, and allows them to pay reliable dividends.

But we should round out this report with another green hydrogen producer which, while also a dividend payer, gives investors exposure to a scrappier kind of company that is working on a disruptive new technology…

Founded in 2007 and based in Essen, Germany, Evonik Industries is the country’s second-largest chemicals company, and an innovator in environmentally-friendly gas production.

In June 2020 it unveiled a new anion exchange membrane (AEM) which can electrolyze hydrogen from water without the use of a rare metal catalyst — a hard-to-source input for traditional electrolyzers amid instability in global rare metal supplies. 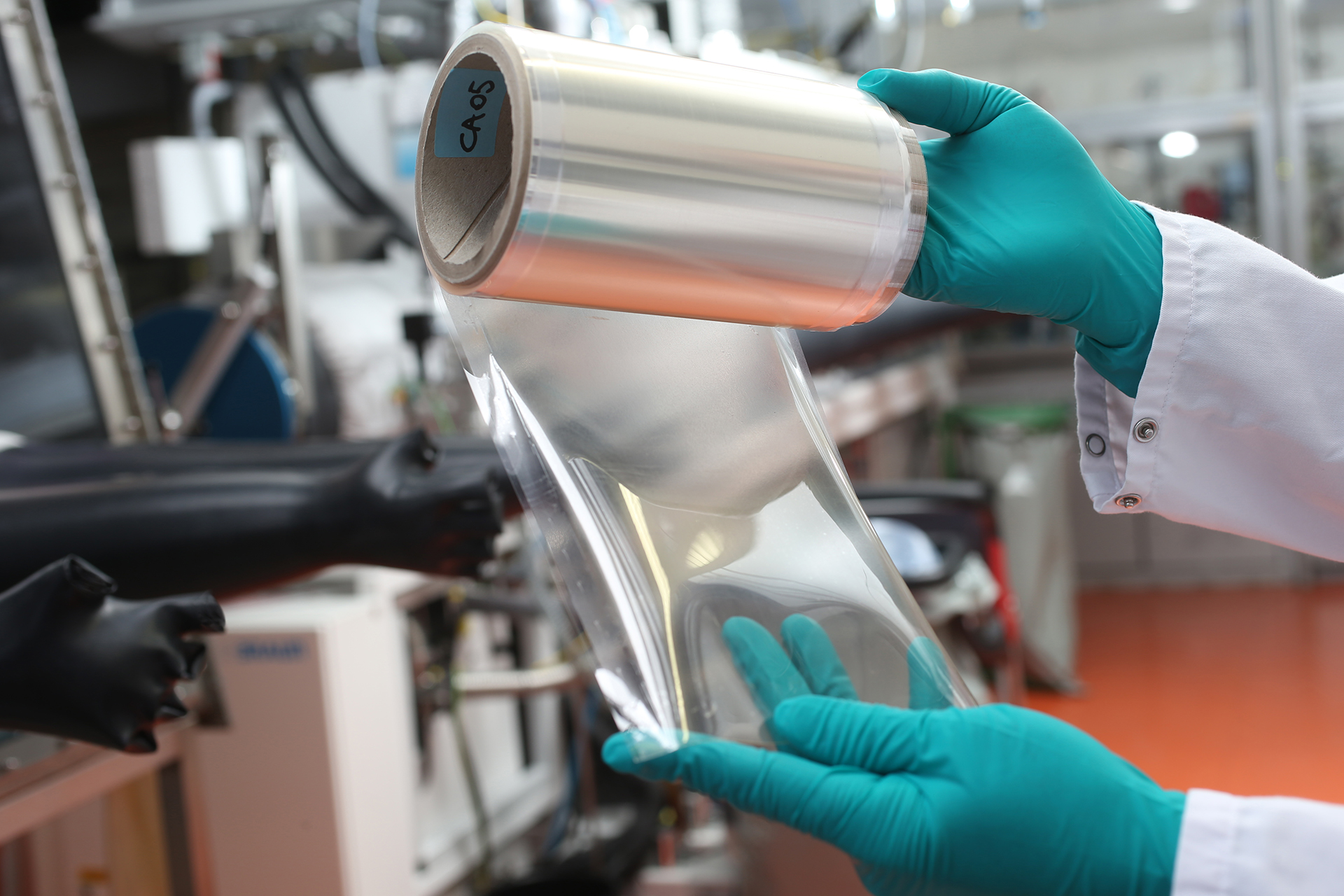 Evonik is also surprisingly financially robust for an experimental tech company. It has no debt and a trailing P/E ratio of less than 22 (and a forward P/E ratio below 20, implying earnings growth in the year ahead). 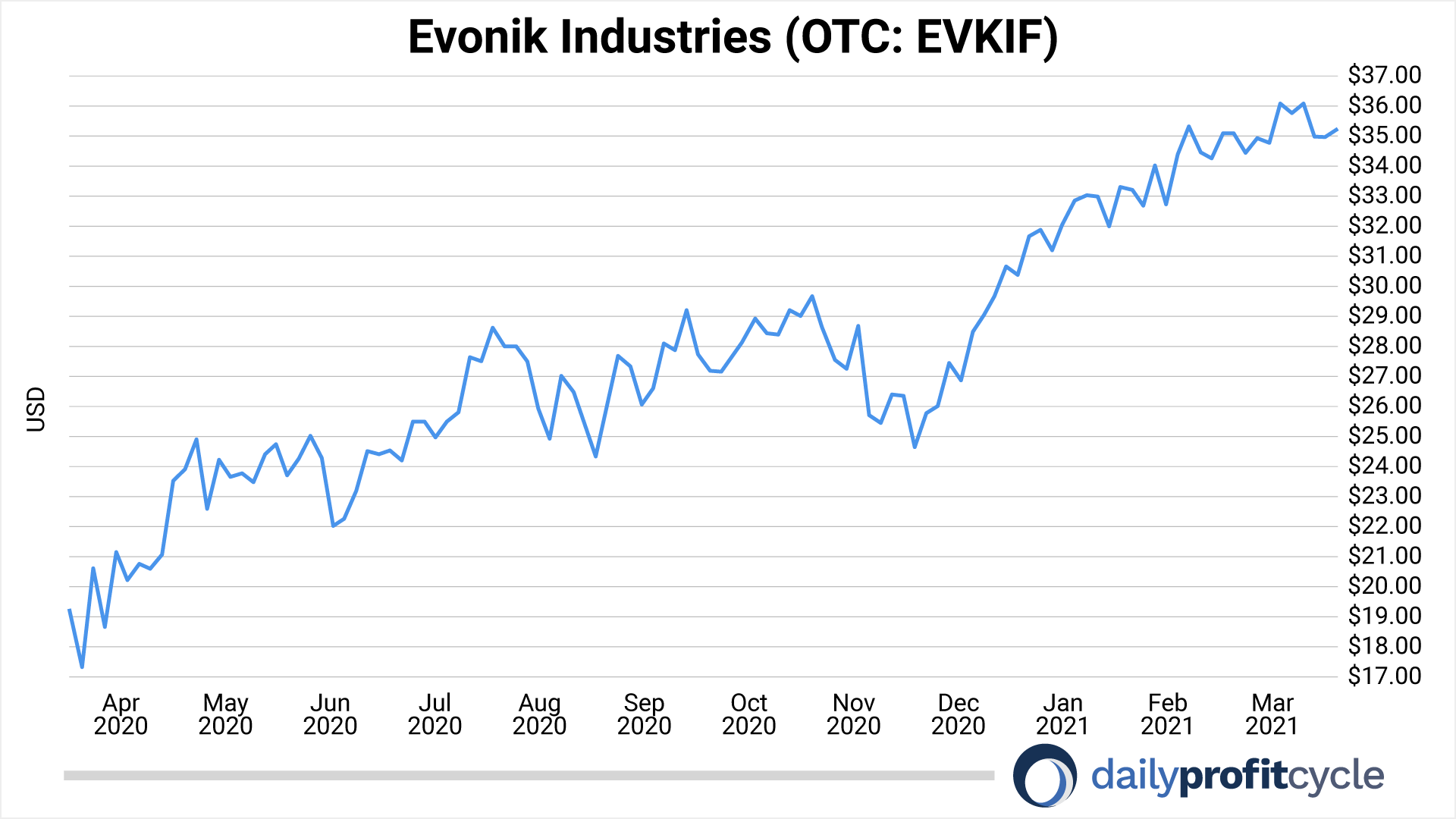 It trades relatively thinly, as you can see above — but investors who have stuck with it for the last year are up more than 40%, and could see a lot more gains in the months ahead.

This Is Only The Beginning For Green Hydrogen

As we’ve discussed in this report, governments around the world are enacting policies that will drastically increase the demand for green hydrogen in the years ahead — and producers like Linde, Air Products, and Evonik are perfectly positioned to benefit.

But this report hasn’t even scratched the surface of how the private sector is expected to ramp up its green hydrogen use in the years and decades ahead. In a June 2020 report, the International Energy Agency wrote that “low-carbon production capacity remained relatively constant and is still off track” with private-sector use projections.

The strategy we’ve outlined above can generate reliable income through a pick-and-shovel play on renewable energy. But in truth, the biggest gains from the hydrogen economy will be found in fuel cell companies and other firms which cleanly use green hydrogen in innovative ways.

These stocks can be volatile — but Daily Profit Cycle readers have a trusted expert helping them navigate the highs and lows of the new energy paradigm — and have already locked in big gains as a result.

Nick Hodge literally wrote the book on energy investing. Learn more about him, our other experts, and their premium research here.