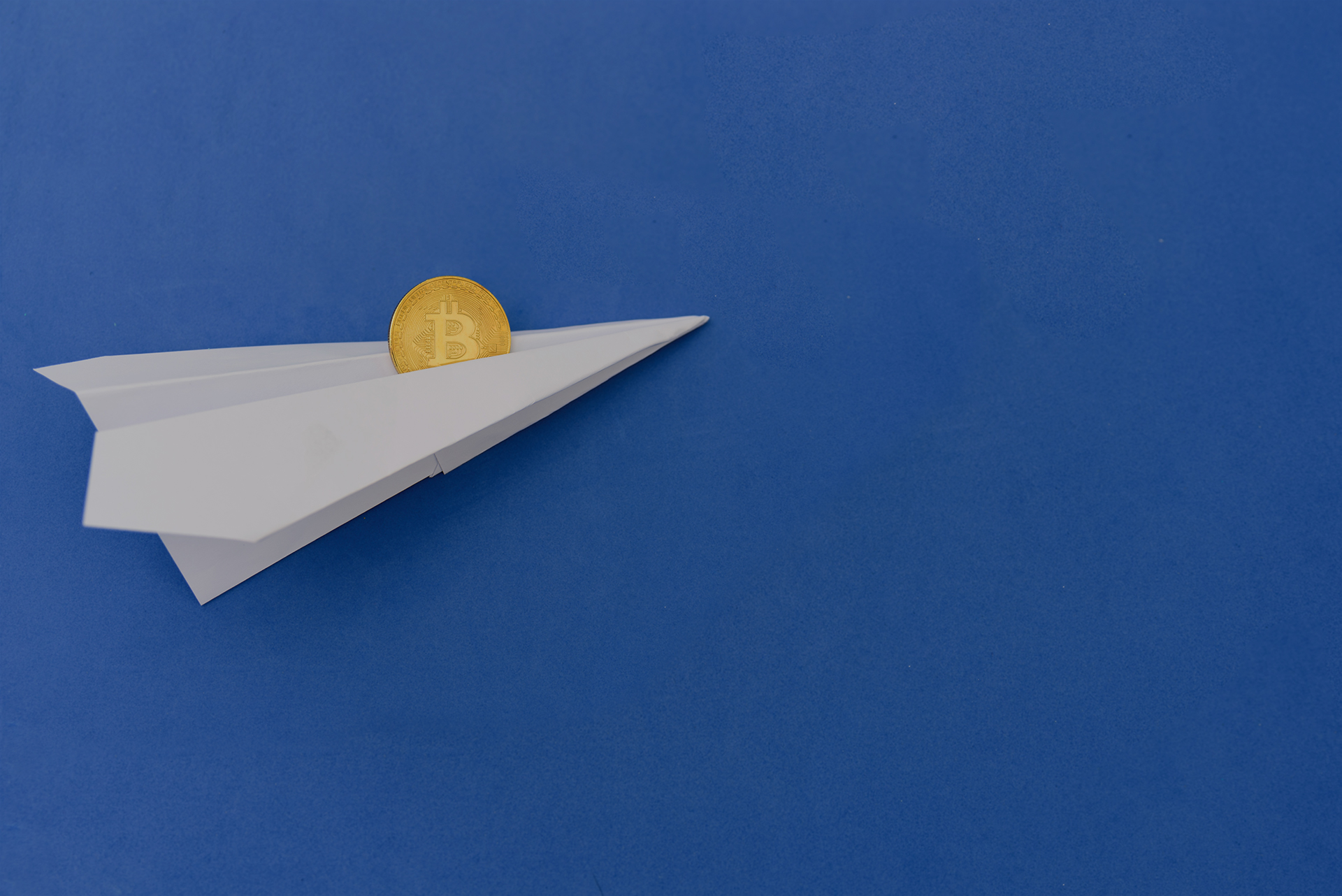 Investors are used to seeing charts like the one below. The potential for exponential growth is part of what makes investing worthwhile.

Ordinarily, however, these kinds of charts represent massive growth over a relatively long time period, like the S&P 500 since World War II or the stock price of Apple (NASDAQ: AAPL) since 1980.

But not this one. 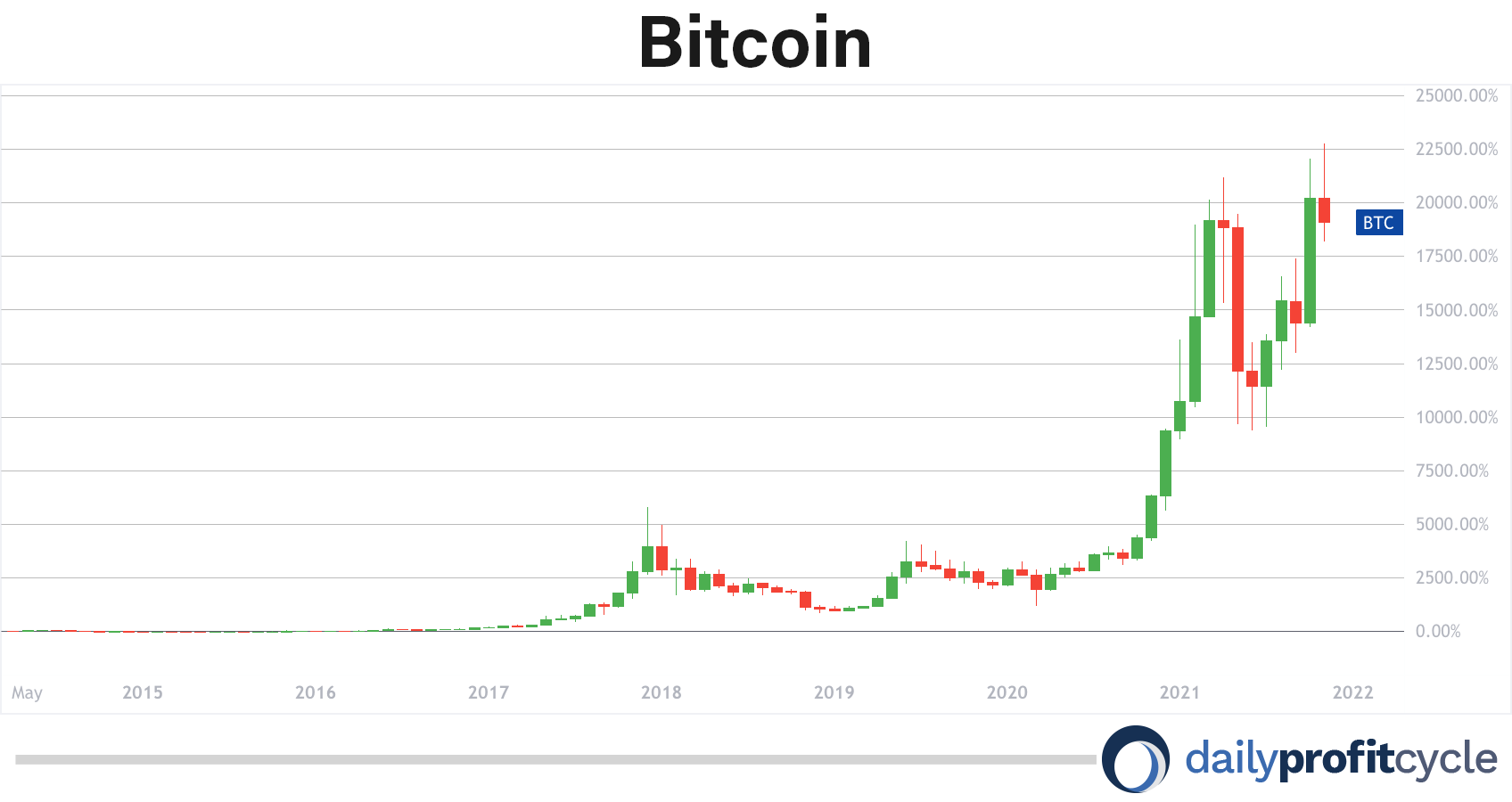 This one represents the price of Bitcoin (BTC) over the last five years.

Cryptocurrencies like Bitcoin didn’t exist 20 years ago. But since their genesis in the late 2000s, they’ve moved from being a niche topic of interest among computer programmers and libertarians — to being one of the highest-returning and most-frequently-discussed investments on the market today.

Of course, the notoriety of cryptocurrency is a double-edged sword.

Each crypto rally has made early investors lots of money — but it has also lost money for many investors who bought in late and at high prices based on hype.

Here at Daily Profit Cycle, we want to make sure that you’re part of the first group.

And we believe the best way to stay ahead of the cryptocurrency curve is by educating yourself about what these fast-growing assets actually are, how they work, and the unique risks and benefits associated with different kinds of cryptocurrencies.

Blockchain 101: What Cryptocurrencies Actually Are, And How They Work

Cryptocurrencies are digital tokens that exist on — and derive value from — decentralized computer databases called blockchains.

Blockchains are electronic record-keeping systems that store information in a network of thousands or millions of individual computers. Cryptocurrency blockchains keep track of who owns and transacts with digital coins.

For instance, the Bitcoin blockchain is a ledger of who owns bitcoins. If I send you a bitcoin, a piece of data (or “block”) is added to the bitcoin blockchain that essentially says, “Nick was the owner of this bitcoin at the time of this transaction, and then he sent it to you as part of this transaction, so now you are the owner of that bitcoin.”

Cryptocurrency blockchains keep themselves tamper-proof through a cryptographic validation process, ensuring only transaction data that has been verified by the other computers in the network can be added. 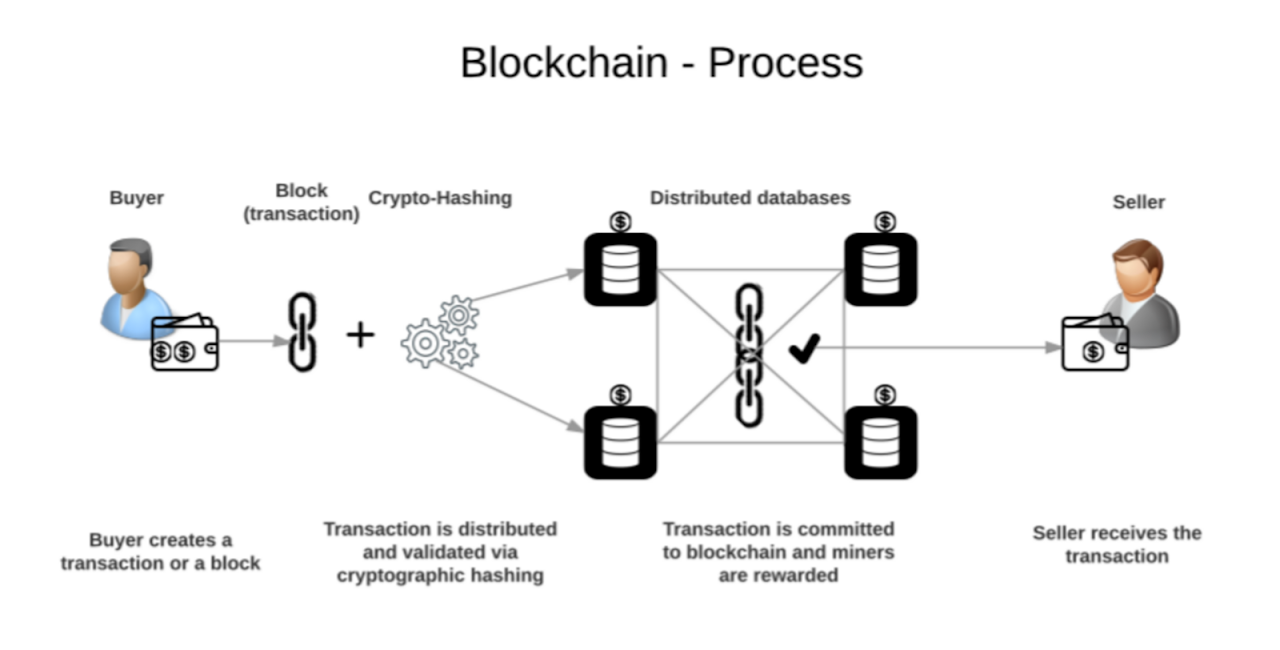 In other words, each block of transaction data is submitted to the blockchain in an encrypted form, and other computers on the network must work to decrypt it using a blockchain-specific key to verify its validity.

These other computers are compensated for their time and electricity costs with small amounts of the relevant cryptocurrency, a process known as mining.

Cryptocurrencies, like conventional currencies, are fungible: any single Bitcoin is identical to and mutually interchangeable with any other Bitcoin.

But cryptocurrency blockchains — the systems that support the coins — come in a variety of shapes and sizes.

As we’ll discuss below, some seek to combat currency devaluation by limiting their total supply of coins, some aim for price stability, and some are essentially elaborate memes with no economic or technological agenda.

Bitcoin is the oldest cryptocurrency on the market today — and the largest by market capitalization, with a value of more than $600 billion at time of writing.

Nakamoto wrote in the original Bitcoin whitepaper that: “the root problem with conventional currencies is all the trust that's required to make it work. The central bank must be trusted not to debase the currency, but the history of fiat currencies is full of breaches of that trust.”

Bitcoin is ostensibly resistant to this kind of “debasement” because its total supply is capped in perpetuity at 21 million bitcoins. Every time 210,000 blocks are mined, the bitcoin reward for mining a new block is cut in half — culminating in an asymptotic reduction in the number of coins mined over time.

These “halvening” events, as they are known in the Bitcoin community, tend to coincide with major rallies in the cryptocurrency, as you can see in the logarithmic chart of Bitcoin’s price below (halvening dates are circled in red). 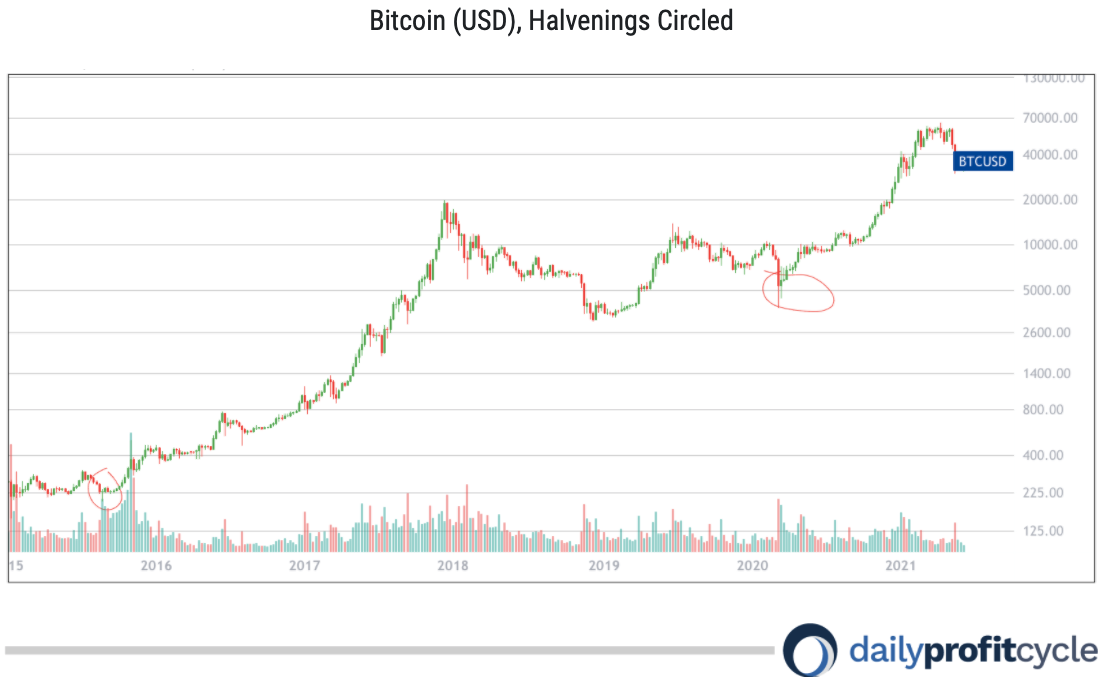 Ethereum is a much younger cryptocurrency, having been launched by programmer Vitalik Buterin in 2015. It’s the second-biggest after Bitcoin by market cap, with a value of more than $290 million at the time of writing.

The Ethereum blockchain is considerably more flexible than that of Bitcoin. Like the Bitcoin blockchain, it keeps track of a digital token, which is called Ether (ETH).

But unlike Bitcoin, Ether has no supply cap. And unlike the Bitcoin blockchain, the Ethereum blockchain has a wide set of use cases beyond verifying ownership of a single coin.

Programmers can write automated transactions called “smart contracts” into the Ethereum blockchain, allowing people to develop secure, decentralized borrowing and lending systems without the need for intermediaries like brokerages and banks.

The blockchain can also be used to create and manage other types of tokens, such as the non-fungible tokens (NFTs) that are gaining traction as a title-deed management system for valuable collectibles and works of art. 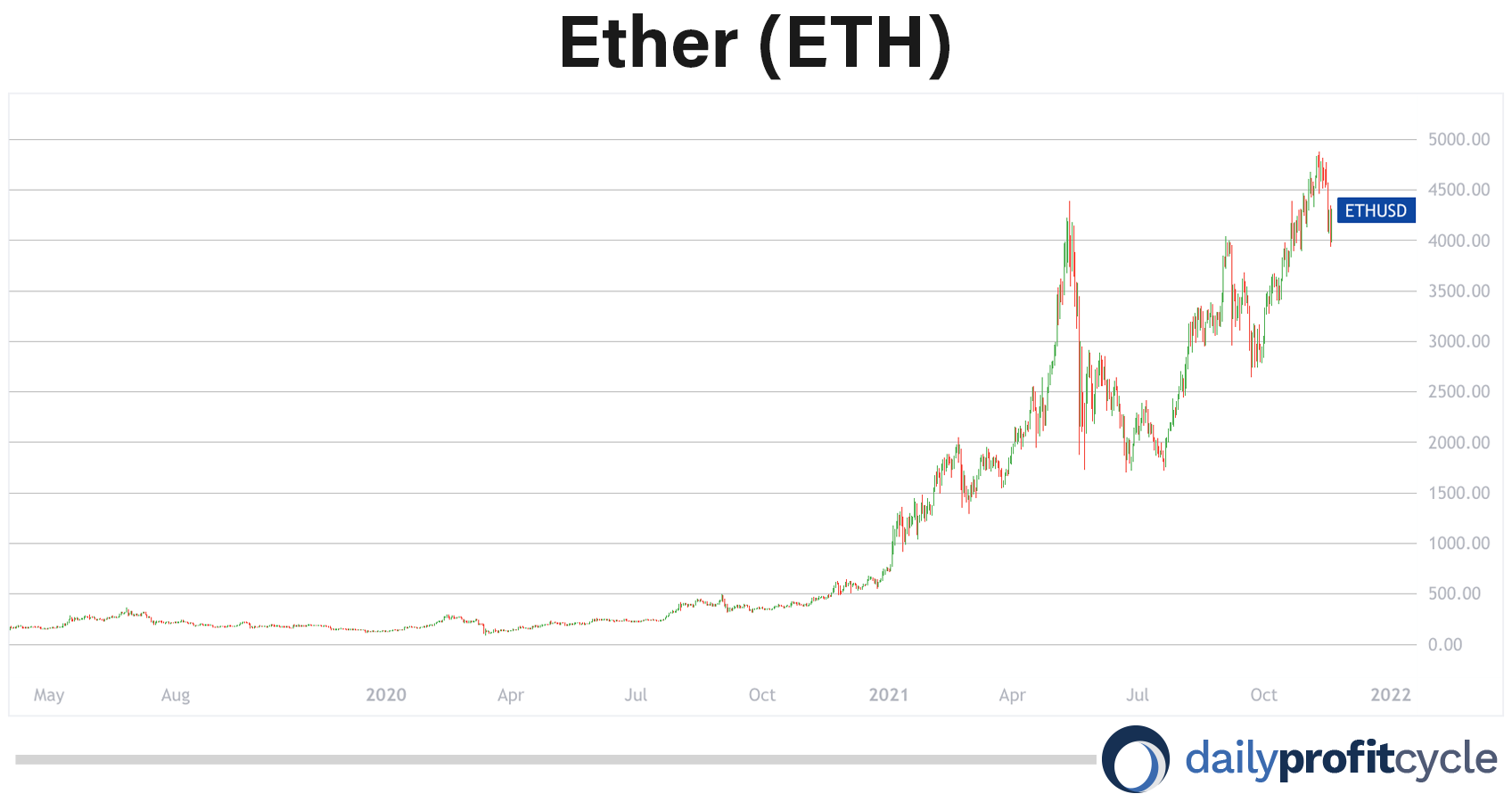 Like Bitcoin, Ether has experienced some wild price fluctuations over the course of its short life, as you can see above. But its price has stayed at a more reasonable level — currently hovering around $2,500, compared to Bitcoin’s $35,000.

Of course, Bitcoin and Ethereum are just the most prominent two out of many thousands of cryptocurrencies available to investors today.

The others tend to fit into one of two classifications…

Many other cryptocurrencies, however, have much more modest agendas. In fact, some are simply trying to provide a stable store of value.

These “stablecoins,” as they are known, peg their market value to some reserve asset, which might be a commodity like gold or a fiat currency like the US dollar.

The third-largest cryptocurrency by market cap, after Bitcoin and Ethereum, is a US-dollar-pegged stablecoin called Tether.

Tether was launched in 2014 by entrepreneurs Brock Pierce, Reeve Collins, and Craig Sellars. It currently trades for the unsurprising price of $1.00 and has a market cap of more than $62 billion.

Other cryptocurrencies have less coherent goals than stablecoins — and some have no particular goal at all. These “shitcoins,” as the cryptocurrency community calls them, are cryptocurrencies that have no discernable purpose and exist only to serve as speculative investments, memes, or jokes.

Even though they serve no particular purpose, shitcoins can still make early or luckily-timed speculators very wealthy. The prime example of a shitcoin is Dogecoin (DOGE), a joke cryptocurrency launched by engineers Billy Markus and Jackson Palmer in 2013.

Dogecoin takes its name and logo from the “Doge” meme, a photo of a chubby Shiba Inu dog that is ubiquitous on social media. Markus and Palmer have explicitly said that they created the cryptocurrency as a joke, and that its only purpose is to satirize the wildly speculative and meme-driven nature of early-2010s cryptocurrency markets. 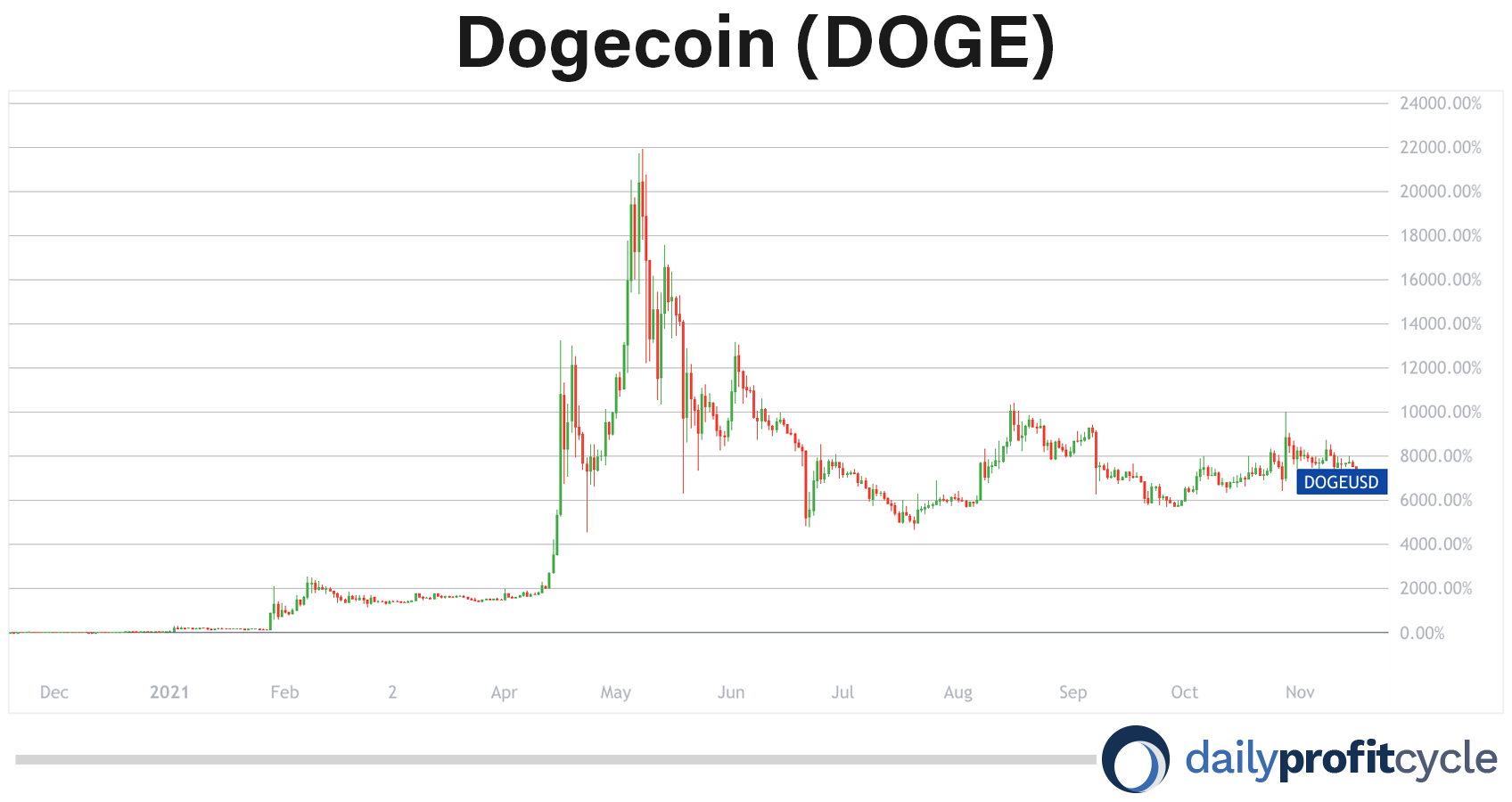 But that hasn’t stopped speculators from betting on it — and notching huge gains and losses in the process.

I first started recommending readers buy Bitcoin as far back as 2013. And I’ve made numerous buy and sell calls on it over the years.

I even helped finance a startup crypto miner and data center in Sweden a few years ago that sold its assets to the largest Bitcoin miner in the world — a company called Northern Data.

That deal was successful because the company used cheap and clean hydropower to power the racks of servers. And because it was in northern Sweden, the air was cool year round, which reduced cooling costs.

Increasingly, energy and crypto are intertwined. You could even say that cryptos are a way to convert electricity into money.

In the future, I think they’ll become even more intertwined.

I think you’ll even see the grid being managed and facilitated by a blockchain.

I know that sounds crazy. I’m sure I sounded crazy recommending Bitcoin in 2013, too.

But the profits speak for themselves.

See how energy and crypto are morphing here.