On May 25, 2020, Derek Chauvin, an officer of the Minneapolis Police Department, killed George Floyd, a 46-year-old black man suspected of a minor financial crime, by kneeling on Floyd’s neck for nearly nine minutes as he pleaded for his life.

Bystanders took video of the killing and posted it to social media — after which it sparked the largest wave of protests in American history. 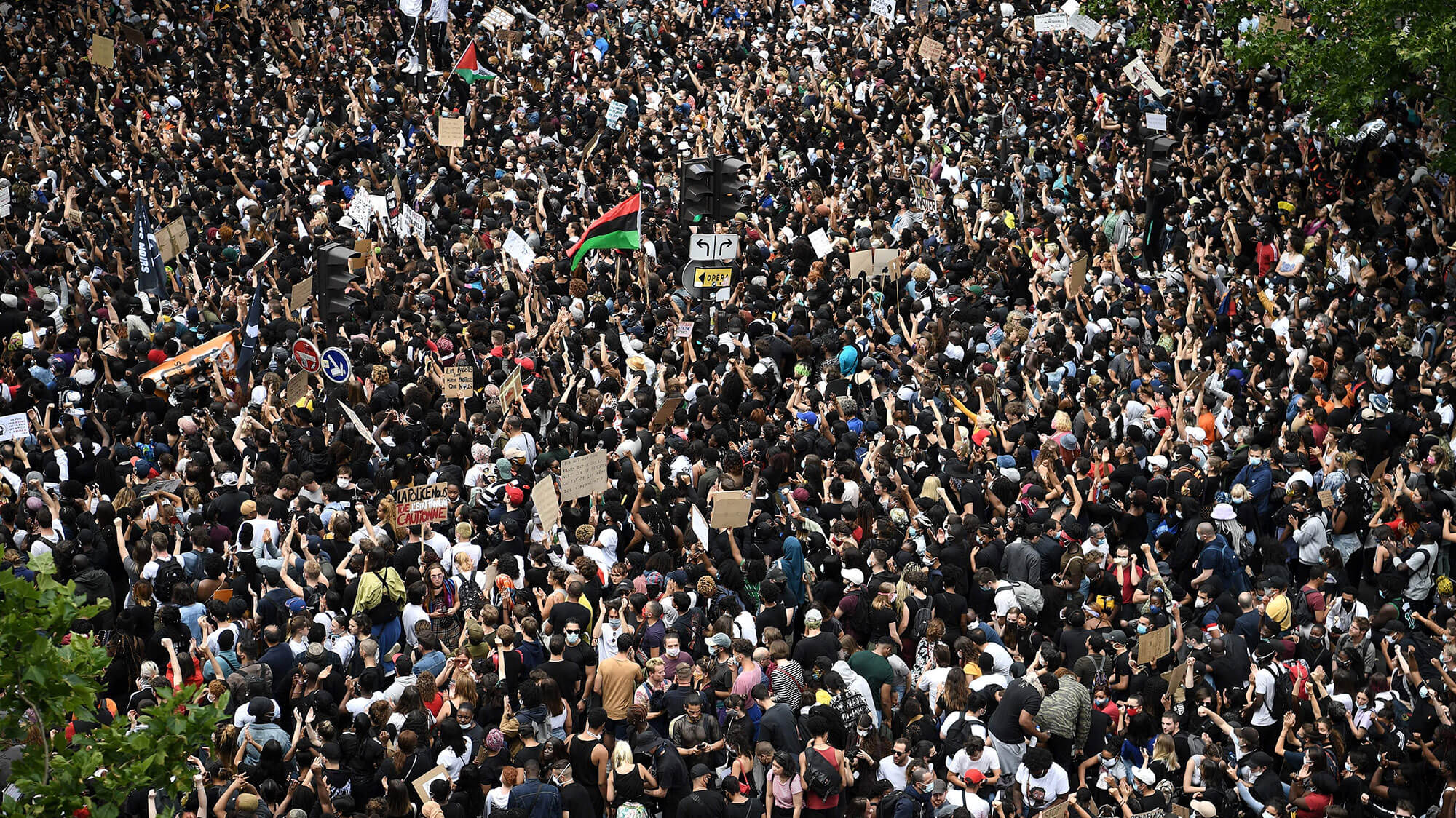 Those protests are still ongoing — in part because of a continuous series of highly-publicized incidents of police brutality against unarmed African Americans that have occured since Floyd’s death.

In the aftermath of such incidents, researchers have noticed an increase in violent crime in the affected community — a result of reduced civilian trust in the police due to fear of brutality, and reduced police willingness to respond to calls due to fear of negative publicity.

A 2017 Colby College-Duke University study, for instance, found that local Google searches related to police violence were strongly correlated with crime rates in a city in the aftermath of a police-involved killing.

So how should governments enforce laws and protect the public when police-community relations break down?

Many are turning to the private sector…

In the aftermath of the killing of Floyd, the Minneapolis City Council voted to defund its police force, in line with the demands of protesters — but also began spending $4,500 per day on private security guards.

And Chicago gave more than $1.2 million to three private security firms to protect businesses in the city’s south and west sides after announcing reforms last summer.

But this shift toward private-sector law enforcement isn’t peculiar to the aftermath of the George Floyd protests.

According to Grand View Research, the global public safety and security industry is expected to be worth more than $812 billion by 2025 — and is expected to grow at a 14.8% compound annual growth rate (CAGR) until then. 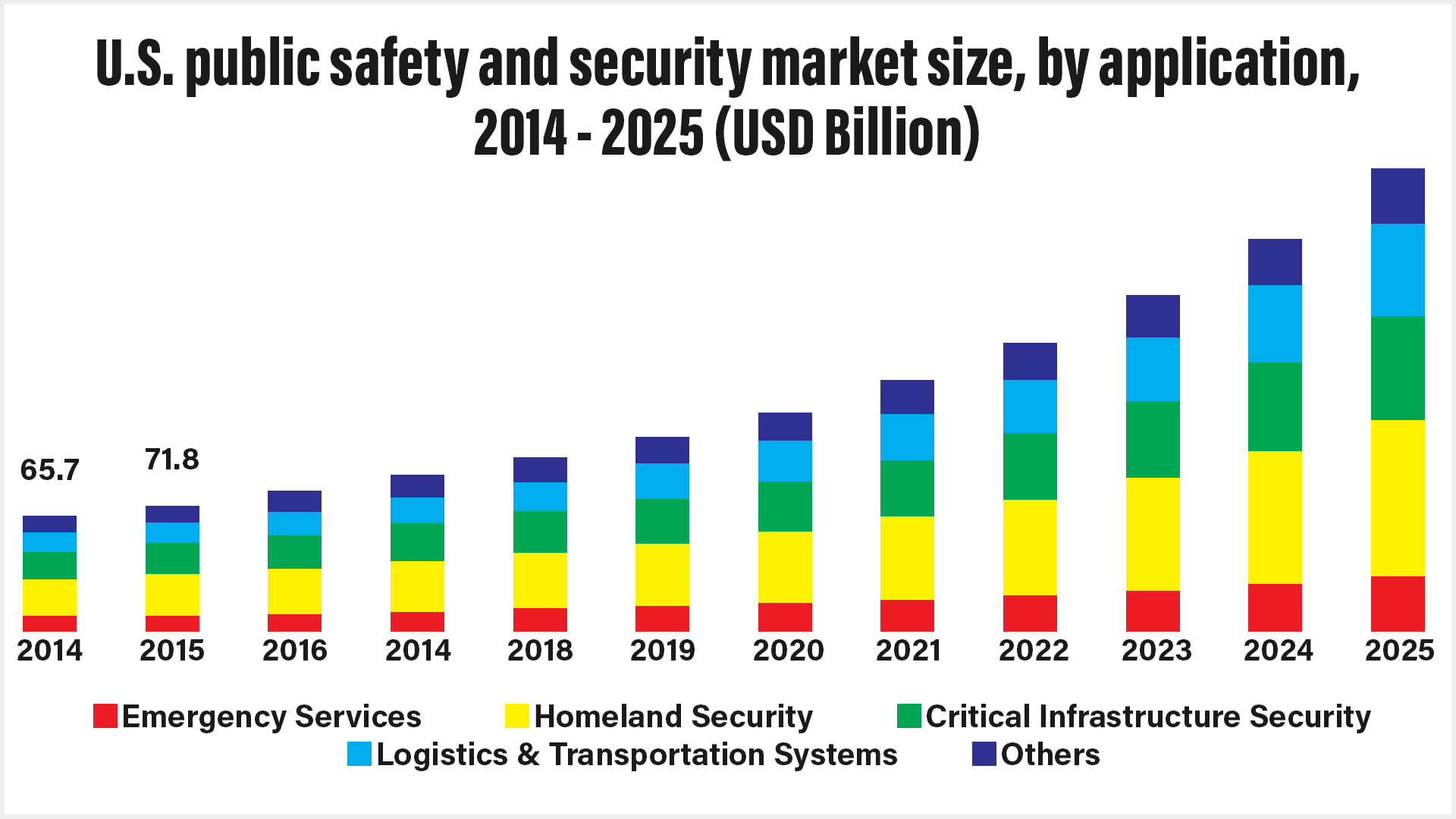 As you can see above, growth is expected to be especially strong in the U.S. — in part due to anticipated changes in law enforcement in the aftermath of Floyd’s death.

Our research team has identified three high-tech law enforcement automation stocks that are especially well-positioned to take advantage of these trends — because their products help reduce the number of potentially violent interactions between police and civilians.

Founded in 1996 and based in Newark, California, ShotSpotter is a manufacturer and servicer of automated gunshot detection sensors.

Its shot-locating microphone arrays are currently used in over 100 cities in the U.S. and South Africa — and have seen rapid demand growth since the nation’s largest law enforcement organization, the New York Police Department, started using them in 2015.

The company has also taken proactive measures to safeguard its products against abuse by rogue or malicious officers. It had the NYU School of Law’s Policing Project test its microphones to ensure that they can’t be used to record conversations or store other data about civilians. 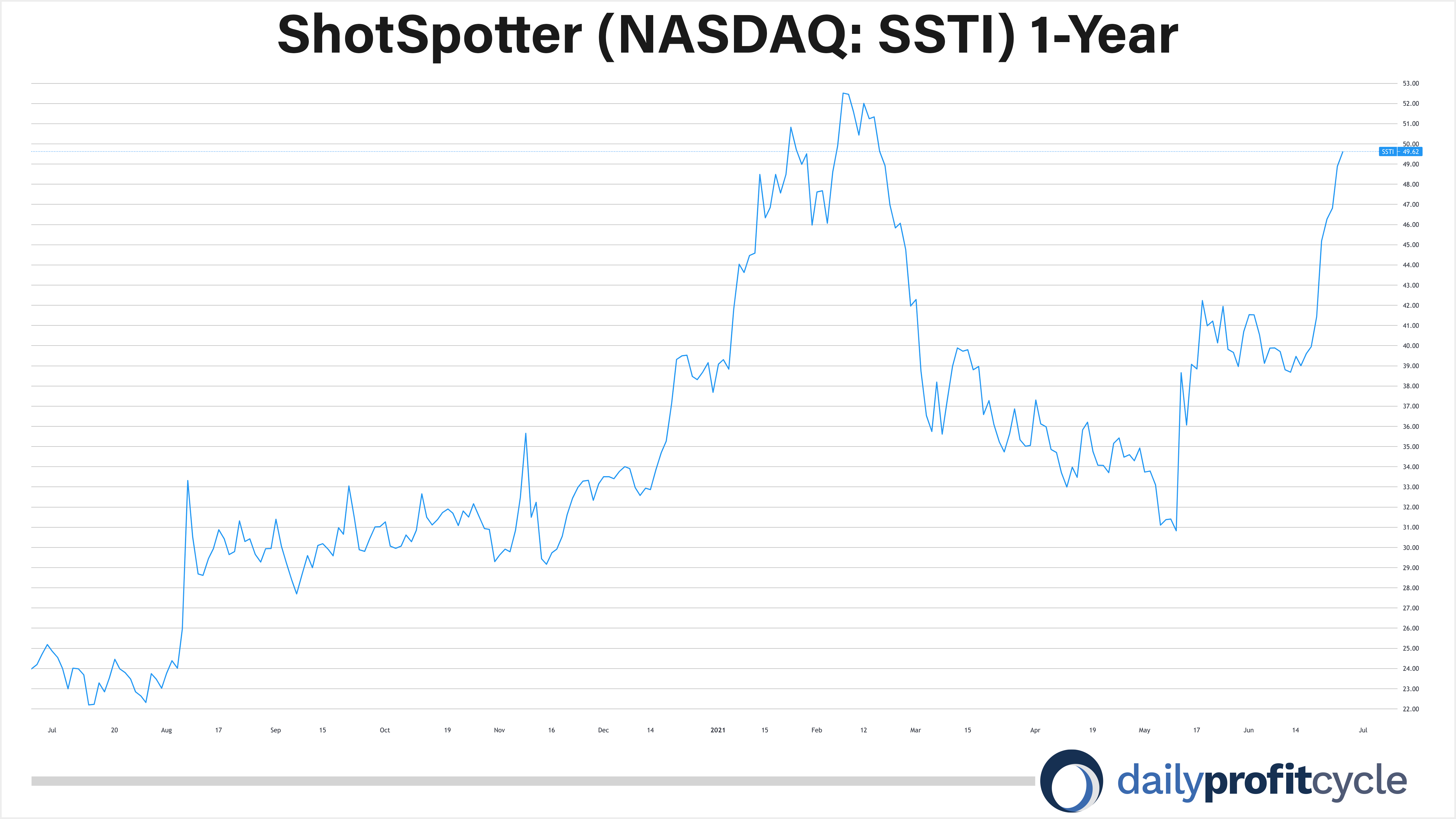 As you can see above, ShotSpotter stock has also performed admirably in recent times — and looking at the company’s financials, it’s easy to see why. The company is profitable on an earnings basis and has almost no debt.

Founded in 2018 and based in Vancouver, VSBLTY Groupe is a computer vision company whose technology can turn almost any digital interface into a camera with facial- and object-recognition capabilities — including weapon-identification capabilities.

The company has largely operated in stealth mode since its founding, but tested its facial-recognition technology at the 2019 Super Bowl in Atlanta. It has also racked up a number of high-profile partnerships in its short life, including Intel, refrigerator manufacturer Imbera, and design firm Peerless-AV.

The company has also expanded outside of the U.S. and Canada — deploying a WiFi-based surveillance network for the Benito Juarez borough of Mexico City. 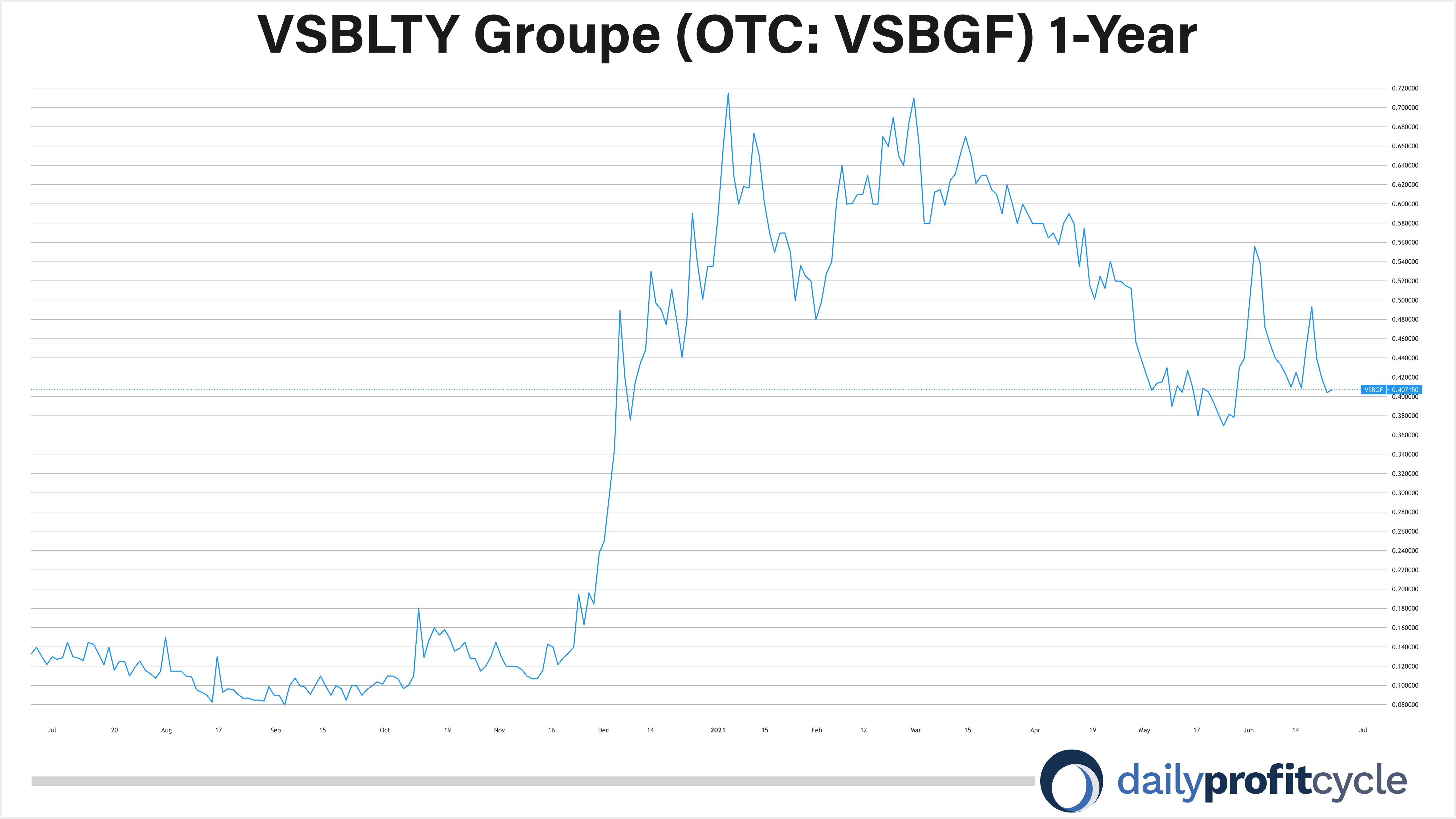 As you can see above, its stock price has appreciated rapidly — but based on its accelerating pace of growth, there’s reason to believe it could go far higher still.

Founded in 2012 and based in Vancouver, Liberty Defense is a manufacturer of weapons-detection technology for public spaces.

Toronto is currently testing its HEXWAVE system — which uses 3D radar imaging and artificial intelligence to recognize weapons — at Pearson Airport, the busiest airport in Canada.

Like VSBLTY, Liberty has recently expanded outside the U.S. and Canada — winning a $1 million grant from the Israel-U.S. Binational Industrial Research and Development (BIRD) Foundation to develop new multi-sensor, contactless threat detection products. 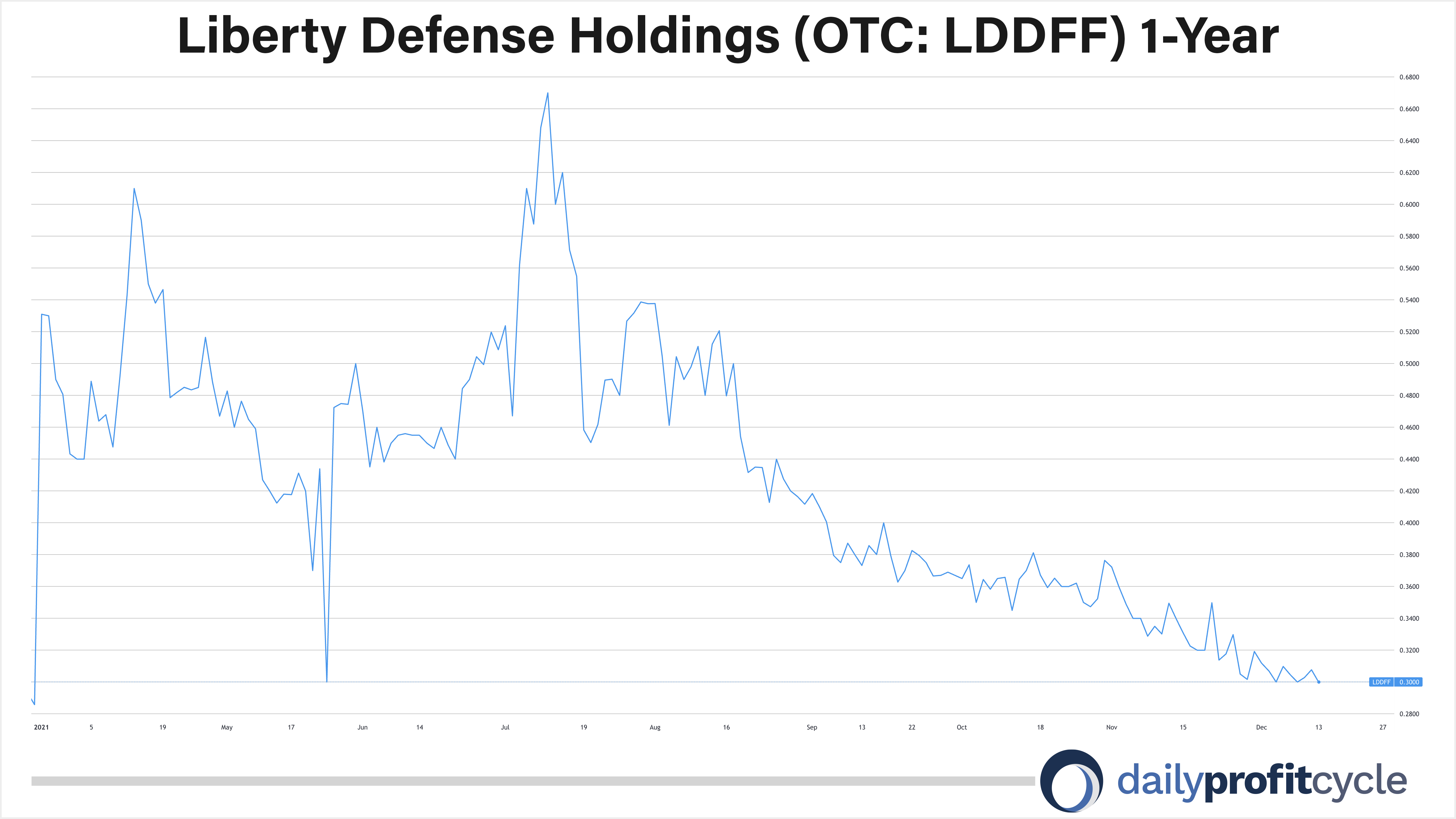 The stock is speculative and trades rather thinly — but a recent dip may have provided the perfect entry point.

What Will The Future Of Law Enforcement Look Like?

Automated security technologies — and particularly the technologies provided by the three firms we’ve profiled above — could solve many of its problems.

Here at Nick Hodge's Foundational Profits, we’ve been tracking these kinds of outside-the-box technology trends for years — and making our subscribers very wealthy in the process. Our latest find is poised to be a massive $110 trillion energy disruption that could see over 65,000% in gains… Click here to learn more.