Where Is All the Money Going?

Where is all the money going?

With that question, I only sort of mean the recent $1.9 trillion relief package. More directly, I mean the money that everyday people have been using to get through this past year.

It wasn’t a question I thought much about until they started talking about the latest round of stimulus checks. After all, the people who have been unemployed or underemployed since this all started will use the money to catch up on bills or catch up where they can.

But what about everyone else? What about the people who can use the money for whatever they’d like? Where are they putting it?

The fact that some people are putting the money towards things they weren’t able to do in 2020 (think travel) or just general household goods like new electronics and furniture shows what some people have on their minds, but it doesn’t tell the entire story.

Some of that money is being put into assets that are outside traditional stocks and bonds. You’ve no doubt heard about some of these over just the last few weeks. It's a trend that’s likely to grow over the next few years.

People are waking up to the fact that the foundation of our economic system is more delicate than leadership lets on.

They’re waking up to the fact that when things take a turn for the worst, the country’s leadership will do the bare minimum, if anything at all, to help those who need it most.

They’re waking up to the fact that taking control of their own finances is the best way to make sure they’re safe and secure no matter what happens.

It’s a story that we’ve seen before. Some of the characters are new, some were in the last act, but it is a familiar story.

One of those characters is a fan favorite: gold, the yellow metal.

Anyone who remembers the 2008 financial crisis remembers that gold took off when it seemed like everything was going to come crumbling down. In a roughly three-year timespan, it went from around $850 per ounce to a peak of just over $2100 per ounce.

Over the past year, gold has seen more movement upward, going from around $1400 per ounce last March to a price of $1730 as of this writing. It’s not as drastic a swing, but give it time because not only is gold enjoying the spotlight, but so are many other precious metals.

Similarly, cryptocurrency is seeing another surge as people look for other places to park their money. Bitcoin, the original cryptocurrency, had an especially good year. A year ago, its price was around $6,000. Today, its price is closer to $60,000. Since January 1st of this year alone, the value has nearly doubled. 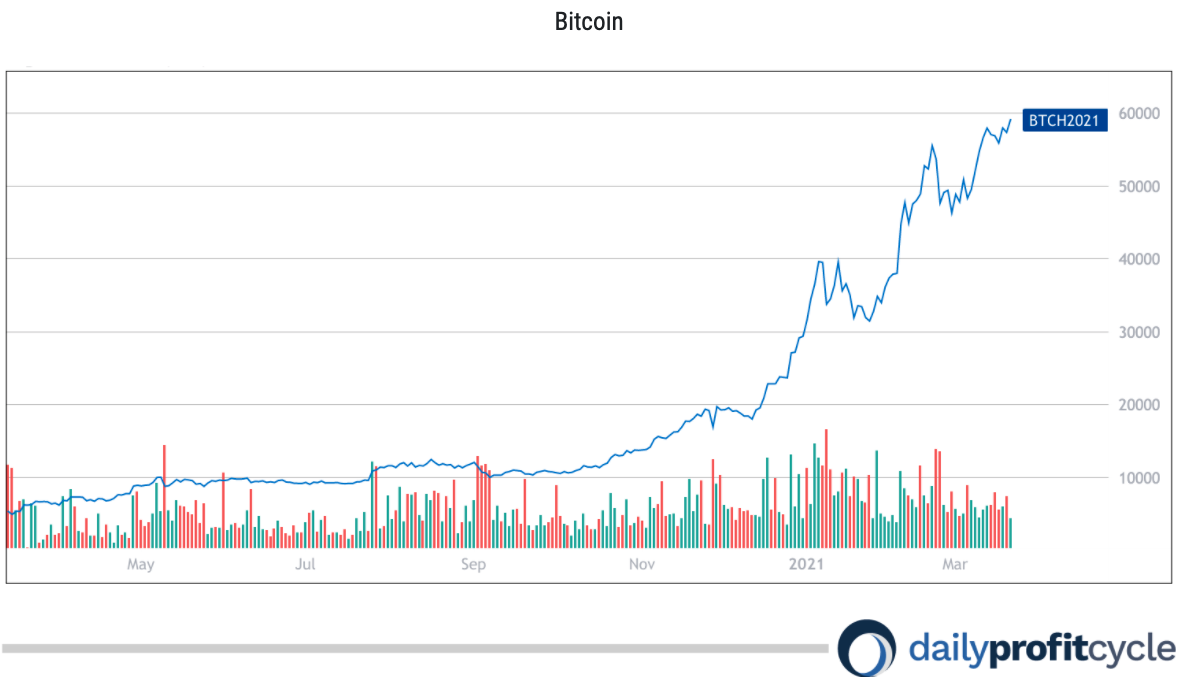 Ethereum, the second-most-popular cryptocurrency, has enjoyed a similar trajectory, going from around $130 a year ago to flirting with $1800 today.

Clearly, the volatility inherent with these assets isn’t scaring investors away as alternatives to traditional markets become more attractive.

More people in my personal life have been asking me how to buy cryptocurrency and more people are buying up Graphic Processing Units to mine the digital coins, frustrating PC-building enthusiasts. These too are just repeats of stories from a few short years ago.

Those are hardly the only two areas seeing more investment over the past year. In just the past few months, sales of digital art for large sums have been making the news. These pieces of art are in the form of non-fungible tokens, or NFTs, which is essentially a one-of-a-kind asset. These NFTs are part of the Ethereum blockchain and have extra information that distinguishes them from anything that appears to be identical on the surface.

In simplest terms, think of it like owning the original version of a valuable painting, complete with certificate of authenticity, as opposed to a print of it.

It’s like a new form of art collecting. Someone buys it, holds on to it, and hopes that its value goes up in time. Some of these assets are already commanding millions at auction houses but it’s anyone’s guess just how far this trend will go.

But, like we’re seeing with the resurgence in commodities and cryptocurrency, it points to investors taking alternative routes to lasting wealth in a world where the traditional paths are losing their appeal.

Here at Daily Profit Cycle, we cover things like commodities and other types of investments that help investors thrive no matter what’s happening in the broader market.

Know what to look for and when, and you’ll never get caught off guard when things take a turn.

Ryan Stancil is an editor and regular contributor to Daily Profit Cycle. He’s been active in the financial publishing industry for more than half a decade, offering insights and commentary on technology and geopolitics to help readers make sense of the constantly changing landscape and how it affects their investments. His readers appreciate his "tell it as it is" writing style, where he always offers a fresh new perspective on what's happening in the market and leaves nothing unsaid.