The Crypto and Commodities Bull Market Rages On

We had the first frost in Eastern Washington this morning.

As I drove down the driveway, it was nothing but white over the alfalfa field.

That means, of course, that winter is coming.

But not in the sense that you know from the TV show where it's going to be a long and cold and non-fruitful winter.

Let's get into the markets…

Speaking of frost you have to stay icy as it relates to digesting the gobbledygook nonsense or otherwise bullshit that you're being fed from the mainstream media.

A couple of examples…

Last week I was telling you it was a crypto buying opportunity when China banned Bitcoin.

It didn't mean shit then and of course this week you have Bitcoin back up to $54,000. It was nothing but a buying opportunity. 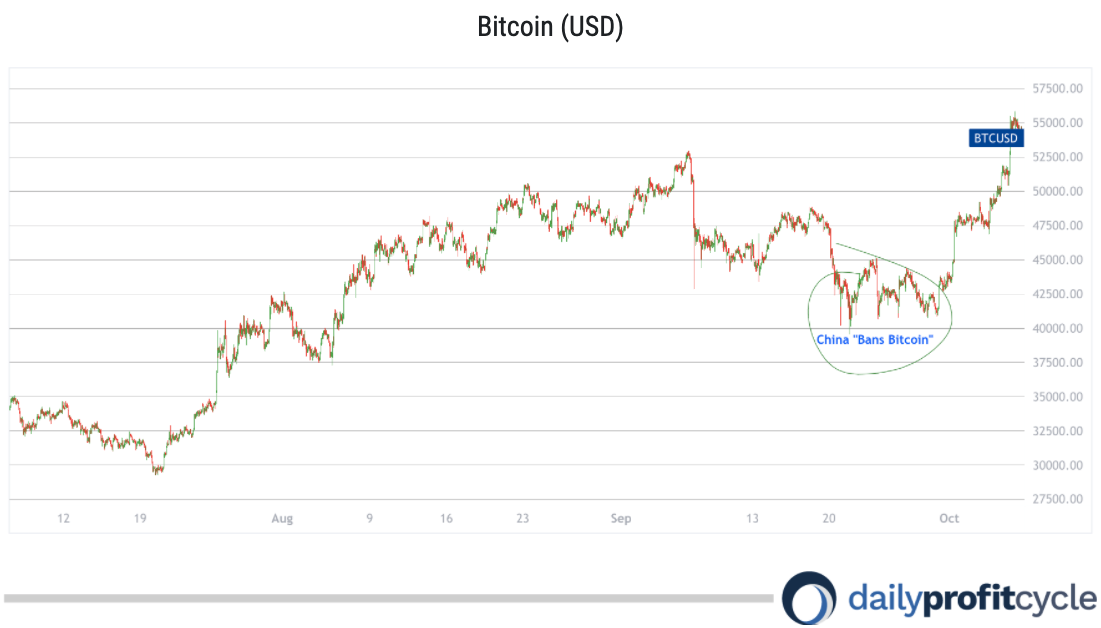 These are the things you do on a week-in-week-out basis to tune out the noise and be true to yourself and invest in the sectors and themes that you know to be in bullish cycles.

That, of course, is what I identify, specialize in, and then drill down on — those bullish cycles — to find larger investments for less risk, if that's what you're into, ETFs and large companies.

Then I drill down on those individual trends to find smaller companies and I either finance them privately or buy them cheaply in the open market.

The other thing I was saying last week is that the September stock market sell-off was just another dip, albeit a bit more staunch selling than the monthly dips we've seen every month so far in 2021.

September shaped up to be the worst month in the stock market, as evidenced by the S&P 500, since really the pandemic started in March 2020. Everybody thought the world was going to end then.

Throw in a couple of other headlines like the debt ceiling, which I was also saying was a nonissue last week, and it made for a really good buying opportunity.

I've been pointing to energy, and now all the headlines are on energy right now, inflation has become a mainstream narrative. Everyone knows that oil and gas prices are rising. They know that natural gas is going through the roof in Europe, et cetera, et cetera.

And so people are starting to settle in on this stagflation theme... and they're getting a bit negative because of how stock markets performed in September.

Just like with crypto, I would say that you have a continued buying opportunity in stocks.

We're just a week away from the third-quarter earnings season. I think that earnings are going to show you that company growth is still readily apparent.

That's going to show investors that growth is still on the table and able to rise commensurately with inflation.

That will mean that stocks go back up, particularly in the riskier smaller sectors or the non-defensive sectors, smaller caps, Russell, things like that.

Those types of stocks are going to come back into favor like we saw earlier in the year.

So that's what I've been writing to my subscribers about.

And of course, commodities are still in a bullish cycle. 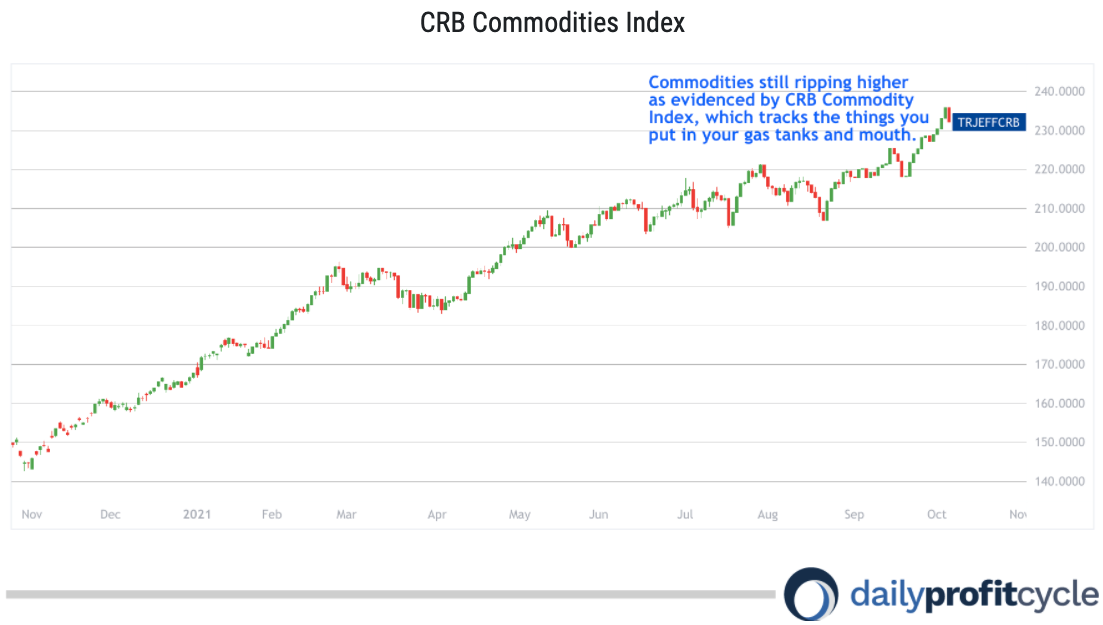 I mentioned the energy commodities already, but also the metals, lithium, copper, even the softs like orange juice and pork, all that sort of stuff, still in a bullish cycle.

The long-term trend I think is still higher stock and commodity prices.

Commodities are particularly the place to be.

We have been in on that side of things with copper stocks, which have also pulled back in the past couple of weeks. A good place to go hunting there.

The uranium space, where there's a bull market just getting started, has had a nice pullback over the past couple of weeks. I would say gaining strength for the next leg up. Time to get positioned there for sure.

So as always plenty of places to make money in the market.

And we’ll be keeping an eye on it for you.