Inflation Stocks Outlook for 2021 and Beyond

I'm off this week to speak at the New Orleans Investment Conference.

I'll give a talk to the entire conference in the main hall and then I'll be on the precious metals panel.

I’ll also have a breakout session with Gerardo where we'll talk about green metals inflating, not only because of monetary pricing pressures but because of the demand from the money being put into fighting global climate change. It's going to be very exciting.

I wanted to give you a little preview of one of the talks I'm going to give because it is, of course, in line with all the things that Gerardo and I write to you about on a daily basis.

All the "Transitory" Inflation Talk from the Mainstream

Obviously, one of the big themes of the conference is going to be inflation. Let's start there because the mainstream media has now waved the white flag on inflation. Bloomberg had an article out last week admitting that it had been wrong about “transitory” inflation. I view them as speaking for the entire mainstream media and financial services industry.

They have been saying for six months that it was transitory. And it turns out, guess what? It's not.

Gerardo and I and others who will be presenting at the conference have told you all along that this inflation wasn’t transitory.

Going back as far as last year, I was telling readers that inflation was manifesting in a real way.

And then when the transitory buzzword started earlier in 2021… we said that's actual, absolute bullshit. It already hasn't been transitory and so it can't be, and it's not going to be because it isn't.

Where Has Inflation Manifested?

Well all over the place. Gold front-ran it all and went to new highs last year.

If you think about things like the Cantillon effect, which was posited over 200 years ago, it talks about how money is distributed once it comes from the king. It is sort of like honey. It comes down and it goes first to those closest to the king.

And those furthest away from the king get the least, and not in time to catch up with the inflation that's already manifested in assets.

Bring that up to the modern-day and you're talking about asset prices going up faster than wages are rising, even though you're now seeing wages starting to rise.

Just like the honey slowly creeps to the edge of the dish… the money's starting to creep out that we've put into the system over the past, frankly, decade.

Gold front ran that, and now it's manifesting in all sorts of places.

And my cute name for that is "whack-a-mole inflation." I've seen a lot of people developing names for this idea that inflation is popping up in all sorts of places. And you've seen it in all sorts of commodities because the commodity index continues to hit all-time highs. 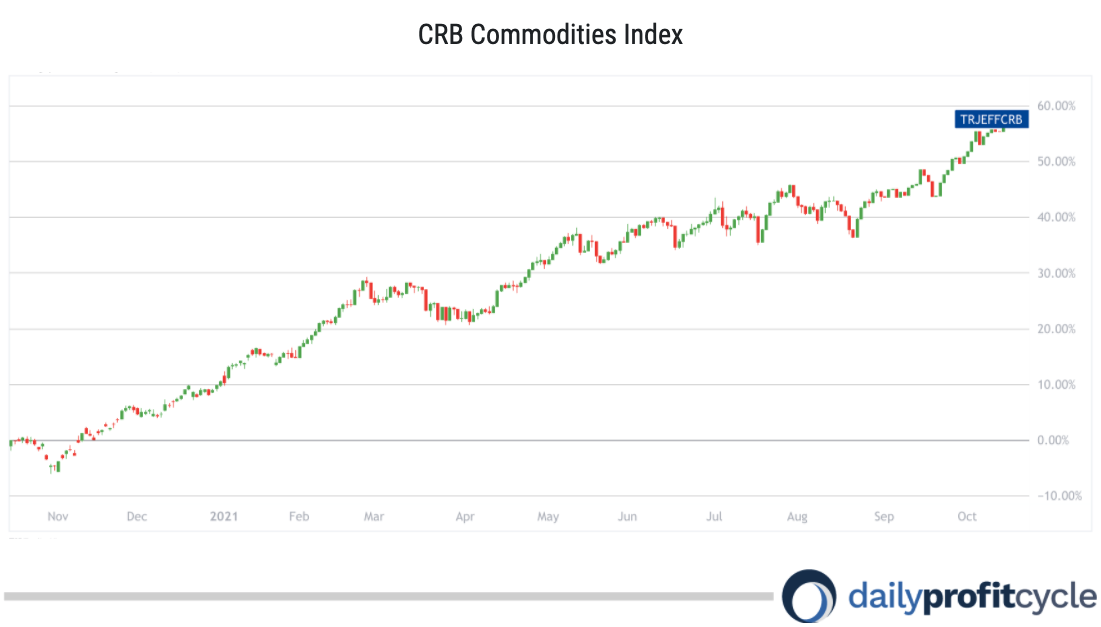 And that includes things you eat and things that power your car. You know: corn, coffee, cocoa, gas, etc. And then, all the battery metals are going up as well. Things that aren't in that index like rare earth metals, for example, and obviously uranium, which I have a new presentation out on just this week that you should watch as well.

Now that the mainstream media has admitted defeat on inflation and has admitted it’s not transitory, I guess the question is, what next?

How Do You Continue to Front-Run the Mainstream?

One of their developing narratives is “stagflation” — or this idea that we might not get growth commensurate with inflation.

But I think that, at least for the next couple of quarters, growth is going to be enough to propel assets higher, to propel commodities higher, to propel stocks higher. And of course, for bond yields to go higher, which have already gone up 100% in a year.

That's sort of what I'm going to get into in my talks in New Orleans, which moles to whack next, as far as whack-a-mole inflation is concerned.

I think the sharpest price inflation in the near term will be in the energy space across the board, especially uranium and the commodities that have fundamentals driving them. Not just the inflation narrative driving them… but real demand drivers that are tied to the electrification of everything and the greening of the grid.

I would encourage you to watch my new presentation about uranium as just one of the commodities that is going to continue rising in price.

And I hope to catch up with you again before the week is out, even though it will be coming from New Orleans.