How to Get Started: Crypto Investing for Beginners

Many people feel overwhelmed by the perceived complexity of cryptocurrencies and are afraid to invest in what is clearly a volatile asset class. But the truth is, it’s extremely easy to get your feet wet trading cryptocurrencies. With major US exchanges like Coinbase, buying Bitcoin or Ether is in many ways easier than traditional stocks.

Simply go to Coinbase.com and set up an account there like you would for any online brokerage, and you’ll be buying and selling crypto in no time. Coinbase also acts as a wallet, so you can store the coins you buy there.

There are other exchanges and wallets to use as well, I explore them in an educational video series called CryptoU that is part of my premium publication, Crypto Cycle. Learn more about that here, including preview of the educational series, which covers:

Plus how-to videos on how to use different exchanges and wallets.

How Big Is the Crypto Market

The crypto market is growing by leaps and bounds and reached an all-time high of over $3 trillion in November 2021.

That’s the combined market cap of all coins.

Bitcoin alone makes up nearly 40% of that. And Etherum makes up another 20%. So those two combined make up nearly 60% of the crypto market’s entire market cap.

What Is Cryptocurrency Market Cap?

Crypto market capitalization (or market cap) is determined by adding up the total of all the coins that have been mined and then multiplying the number of coins in circulation by the current market price of a single coin.

Bitcoin is programmed to only allow 21 million coins to ever be mined. At the start of 2023 there will be nearly 19.25 million mined. Multiplying that times its current price of around $16,500 gives Bitcoin a market cap of nearly $320 billion. Note, though, that the market cap is constantly fluctuating with the amount of coins mined and the current price. 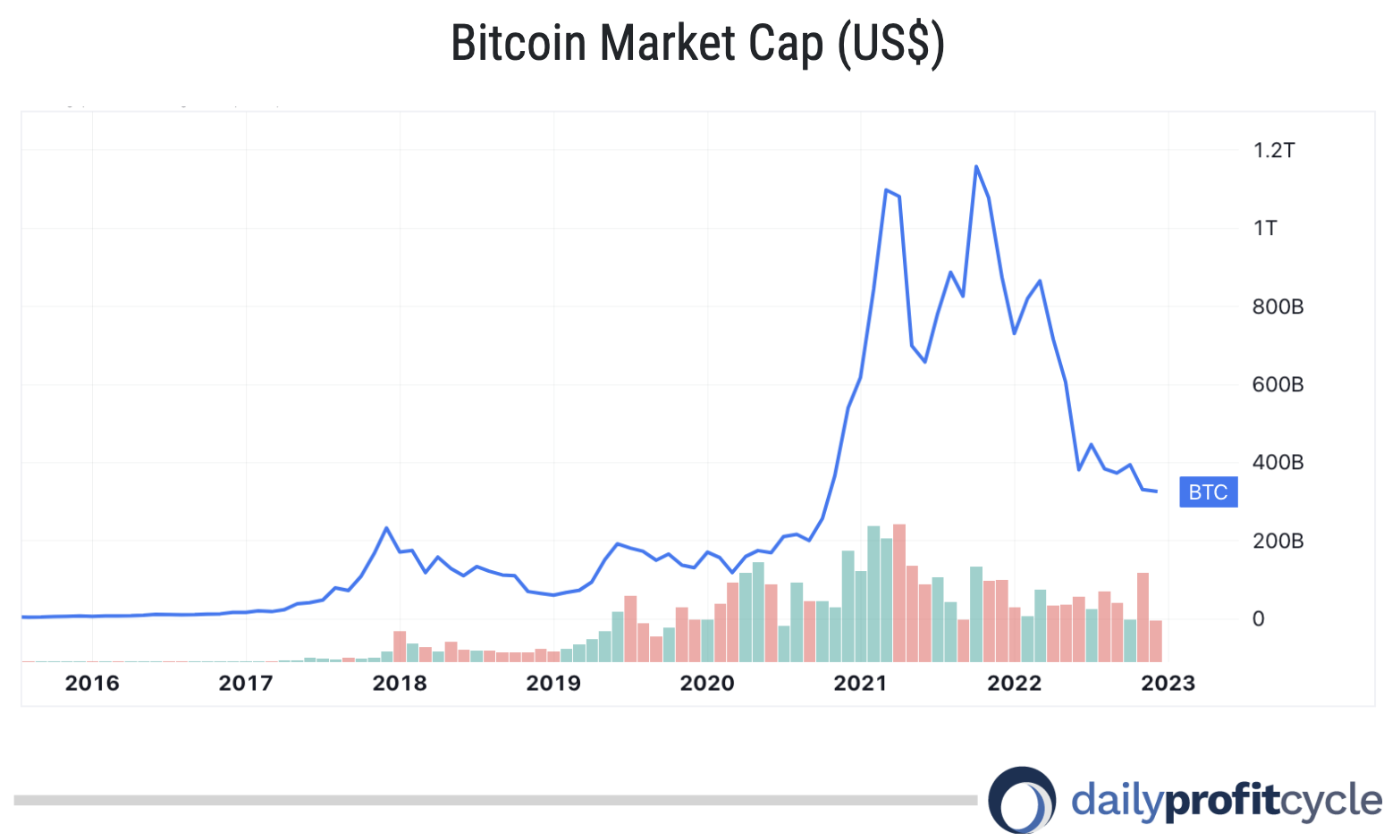 Generally speaking, the larger a coin’s market cap, the more stable of an asset it tends to be.

This is why Bitcoin, which has the largest market cap by far, sees less dramatic selloffs when compared to smaller market-cap altcoins which often plunge 99% in value during bear markets. This volatility works to the upside as well, which is why investors love to speculate on altcoins hoping to find the next 100x gem. I outline three such altcoins to take a look at here.

Large-cap – This includes Bitcoin and Ethereum. Large-cap coins have a market cap of over $10 billion. This includes Bitcoin (BTC), Ethereum (ETH), as well as larger stablecoins like USD Coin (USDC) and Tether (USDT). These are considered lower risk investments due to their high liquidity and established track-record of performance.

Mid-cap – These are coins with market caps between $1 billion and $10 billion. They are higher risk but have higher potential reward. This includes Solana (SOL), Avalanche (AVAX), Shiba Inu (SHIB), and many others.

Small-cap – These are projects with less than $1 billion and are by far the most volatile. You can see huge gains in these small-cap tokens but can also lose it all. There are thousands of them with more created every day.

And this is mostly due to what’s called the halving (sometimes called the halvening). This refers to the process built into Bitcoin that cuts the mining rewards in half every time 210,000 blocks are mined.

This event occurs roughly every four years and coincides with huge rallies in the price of Bitcoin. The rest of the cryptocurrency market follows behind with the many thousands of altcoins often seeing much higher gains as speculation runs rampant.

Bitcoin’s first halving occurred in 2012 when the asset traded for a price of $12. A year later, Bitcoin had soared to over $1,000 before correcting and trading sideways for a couple of years. 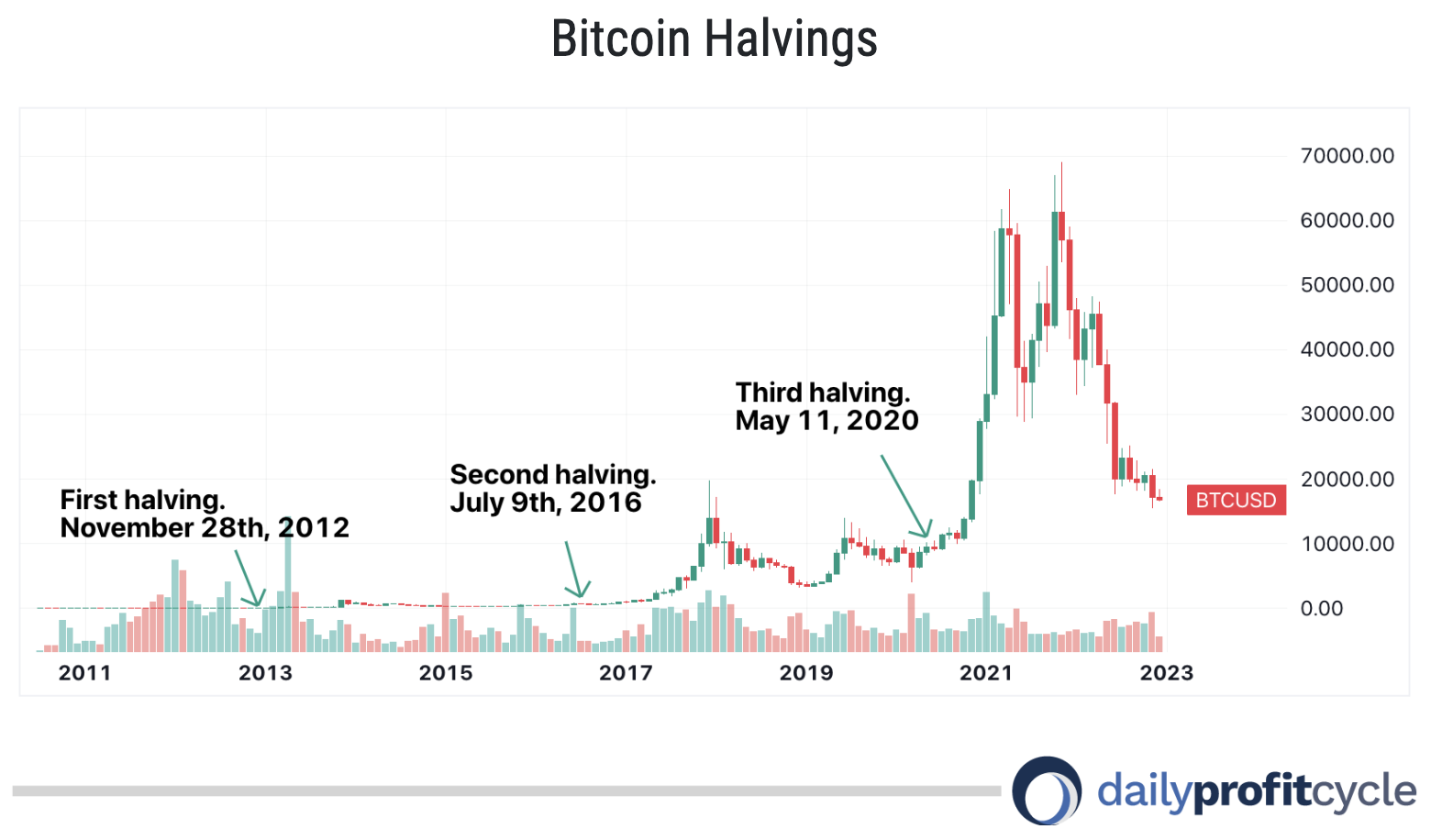 The next halving is slated to occur in March of 2024. It’s interesting to note that the price of Bitcoin tends to bottom 15 months ahead of the next halving event. This would mark November 2022 as the bottom of the current bear market with Bitcoin sitting at just under $17k. If we follow the historical cycles, Bitcoin should begin surging in 2023 in anticipation of the 2024 halving topping out sometime in 2025.

Much of this will depend on the macroeconomic environment. Bitcoin and other cryptocurrencies have only existed in an environment of QE and low interest rates – essentially a 12-year bull market in stocks. With the Fed aggressively raising interest rates, we’ve witnessed a lot of pain in the markets.

We also have to contend with a potential recession. As such, Bitcoin might not be as enthusiastic as it was in previous cycles. Still, the trend is our friend, and there’s no doubt that we’re going to see some major positive price movement in the sector moving forward.

Given the fact that we are likely very near the bottom of this current crypto bear market, investing in safe large-cap cryptos like Bitcoin and Ethereum is a common sense strategy. I explain them in more detail below as well as a couple of altcoins that I personally like.

Bitcoin is the oldest cryptocurrency on the market today — and the largest by market capitalization, with a value of more than $600 billion at time of writing.

It was created in 2009 by Satoshi Nakamoto, a pseudonymous computer scientist (or group of computer scientists) who objected to the financial sector bailouts many governments undertook in response to the 2008 financial crisis.
Nakamoto wrote in the original Bitcoin whitepaper that: “the root problem with conventional currencies is all the trust that's required to make it work. The central bank must be trusted not to debase the currency, but the history of fiat currencies is full of breaches of that trust.”

Bitcoin is ostensibly resistant to this kind of “debasement” because its total supply is capped in perpetuity at 21 million bitcoins.

Ethereum is a much younger cryptocurrency, having been launched by programmer Vitalik Buterin in 2015. It’s the second-biggest after Bitcoin by market cap, with a value of more than $158 billion at the time of writing.

The Ethereum blockchain is considerably more flexible than that of Bitcoin. Like the Bitcoin blockchain, it keeps track of a digital token, which is called Ether (ETH).

Programmers can write automated transactions called “smart contracts” into the Ethereum blockchain, allowing people to develop secure decentralized borrowing and lending systems without the need for intermediaries like brokerages and banks.

The blockchain can also be used to create and manage other types of tokens, such as the non-fungible tokens (NFTs) that are gaining traction as a title-deed management system for valuable collectibles and works of art.

Another major feature of the upgrade was the “London Hard-Fork.” Unlike Bitcoin, Ethereum has no fixed maximum supply. But with this update a certain amount of all mined Ether will be “burned,” which permanently destroys a portion of the digital currency. ETH issuance is projected to decline by 90% and the supply of Ether reduced by 5% annually. As demand for ETH increases and supply decreases, this deflationary pressure should cause a long-term rise in the price of existing Ether tokens.

And considering that 90% of decentralized finance (DeFi) is built on Ethereum, the long-term price outlook for the token looks strong.

Like Bitcoin, Ether has experienced some wild price fluctuations over the course of its short life. But its price has stayed at a more reasonable level — currently hovering around $1,100, compared to Bitcoin’s $17,000. 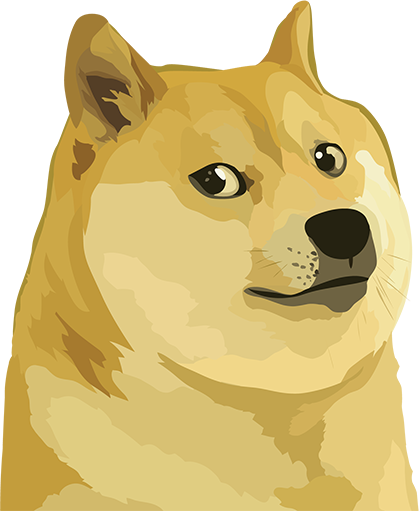 Started as a joke back in 2013, Dogecoin is a cryptocurrency based on the popular “Doge” meme. Friends and software engineers Billy Markus and Jackson Palmer spent an afternoon copying a bunch of Litecoin code to create their own coin. This was done to poke fun at the speculative mania that surrounded the crypto market during its first major bull run.

It was mainly used as a fun internet currency that people would send each other for free and for much of its life it was worth just a fraction of a cent. But during the height of the 2017 bull market it exceeded $0.01 for the first time.

It has long been a favorite of Elon Musk, who has supported the project for years. He was largely responsible for triggering its massive rise in 2021 to $0.74 with various tweets and media appearances.

It all goes to show how much money can be made off speculation in the crypto markets.

Dogecoin still has a fierce and passionate community as well as the world’s richest man behind it. As such, I don’t think it will die any time soon. And with Elon Musk now running Twitter, Doge will likely be incorporated into their digital payments system in the future. Tesla already accepts Dogecoin for merchandise and select charging stations. I wouldn’t be shocked to one day be able to purchase a whole car with it in the future.

Some companies that currently accept Dogecoin payments include:

With over 500 million users worldwide, Binance is the largest cryptocurrency exchange in terms of daily trading volume. It was founded in 2017, but was forced to move out of China and relocate to the Cayman Islands after the Chinese government cracked down on the crypto industry.

The Binance Smart Chain is a fast and inexpensive layer-1 protocol. And it has seen massive growth in the last couple of years due to Ethereum’s slow speeds and high fees. It has been used as a cheap and fast alternative.

PancakeSwap may sound like a joke but it’s growing in users every day. With $100 million-plus in 24-hour trading volume, it has become the most popular decentralized exchange (DEX) on the Binance Smart Chain. It allows you to exchange Binance Coin (BNB) for thousands of other tokens without the need for a centralized service.

This platform has grown massively since its September 2020 launch. It now has many users and supports many assets. It’s also a popular platform for purchasing many of the small market-cap meme coins that have exploded in popularity.

As mentioned before, BNB coin is used to pay transaction and trading fees on the Binance Smart Chain. Because of this utility, its price has been relatively stable compared to other cryptocurrencies that have been dumping over the last year. I think there is tremendous growth potential for this coin in the future.

This article only scratched the surface of the large and constantly evolving crypto universe.

If you’re looking for further reading or trading instruction, I have much more info for you here.

I have a premium research service that comes with a complete educational series called CryptoU.

And I also run a real money portfolio that allows you to follow my trades in real-time.

I have learned via hands-on trading and investing over the years, becoming a self-taught expert. And I was able to make over 90 times my money in the last crypto cycle.

See what else I’ve learned and what’s next for cryptos in this continued in-depth research.