We’ve been talking a lot about gold lately… and for good reason. With the broader indices and most other asset classes cratering — gold continues to show incredible resiliency with its most recent move above US$1,700 an ounce.

Gold has a long-established track record as a powerful hedge against inflation, political and economic turmoil, and the dwindling purchasing power of fiat currencies.

Of course, right now, we have a strong dollar — in fact, it’s the strongest it has been in nearly two decades. And that may be the one thing that’s “temporarily” keeping the yellow metal from breaking out to US$2,000-plus per ounce.

As we all know by now, the Fed is committed to raising interest rates — at ANY cost and at ANY level of pain to the consumer — until such time as it is able to get inflation under control.

Those higher interest rates mean a firmer dollar… and since gold is priced in US dollars, an overly-hawkish Fed can be seen as a temporary headwind for the gold price.

But how long can that realistically last?

To shed some light on that very important question… one only needs to look at this week’s headlines.

America’s gross national debt just surpassed $31 Trillion for the first time in history as a result of the US government’s unprecedented borrowing spree, which it used to prop up the economy during the height of the pandemic.

Our congressional leaders and Fed-heads are now dealing with the heavy toll of that excessive borrowing as ordinary Americans are now faced with the highest rate of inflation since the celebrated release of the Sony Walkman.

Even the recent rate hikes — which have pushed the Federal Funds Rate from essentially zero to what will likely be 4.4% by year-end and then even higher in 2023 — haven’t been able to rein in inflation to any significant degree.

Remember, inflation peaked in June at 9.1% and has only come down about a percentage point to currently right around 8.26%.

That means additional large-scale rate hikes are on the way… and, along with them, recession… and quite possibly a deep one.

So much for the “soft landing” the Fed has been promulgating.

And yes, we’re talking about the same Fed that, up until very recently, was calling this year’s now deeply entrenched inflationary rise as “transitory.”

The trickle-down effect, of course, is higher borrowing costs, which are hurting companies across-the-board that require capital… and we’ve already seen some horrendous earnings warnings and misses by the likes of FedEx (NYSE: FDX), CarMax (NYSE: KMX), Carnival (NYSE: CCL), and Ford (NYSE: F) — to name just a few.

Even more alarming… over 90% of CEOs believe a recession will indeed take hold in the United States within the next 12 months with more than half of those polled already planning layoffs.

The housing boom is also over… dead… caput… harkening back to the housing bubble of 2006 and the Great Recession of 2008 that swiftly followed.

We all witnessed gold’s shining performance back then: it surged from US$600 to US$1,800 an ounce in just 60 months!

In fact, for years after the last Great Recession gold outpaced US home values by a factor of 2. 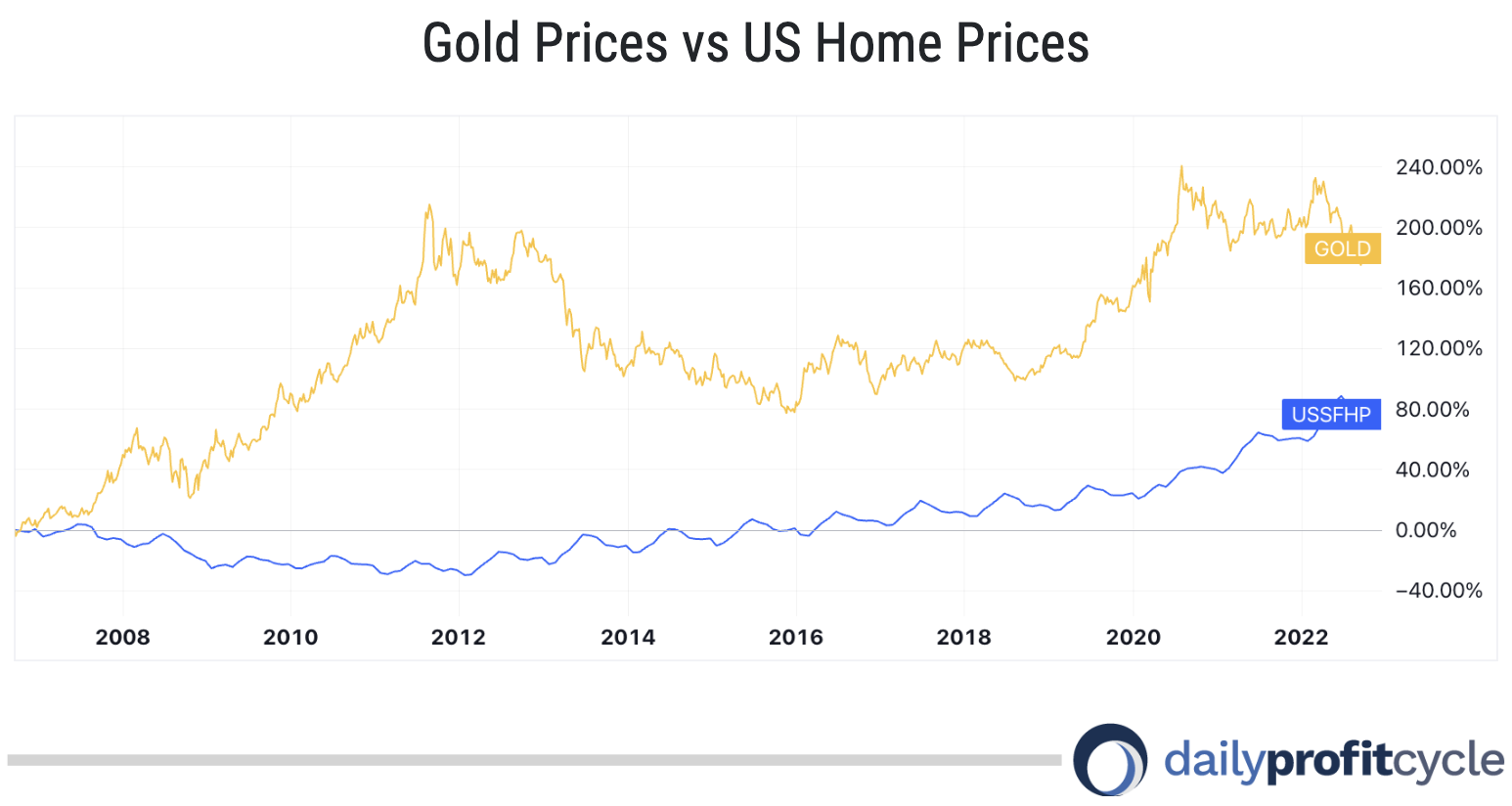 In recent years, virtually all American homeowners have benefited from rising home values… a reliable hedge against inflation.

Yet, those days — along with the days of quick refi’s and home equity loans on beneficial terms — are now a thing of the past as higher borrowing costs are driving potential buyers out of the marketplace in droves.

Mortgage rates in the US have more than doubled since the start of the year… from roughly 3% to currently closing in on 7%. That figure will only get bigger as the Fed continues its aggressive rate-hike stance into next year.

Gold continues to hold up well and is setting up for an extended bull run as the economy heads toward a hard landing and as the Fed’s financial house of cards comes crashing down.

The bottom line is that investors should be holding a percentage of their personal wealth in gold bullion and/or gold coins as a hedge against the unavoidable financial turmoil that has only just begun.

Higher gold prices are also a major boon to companies that produce and explore for the yellow metal.

And thus, I have a couple of recommendations for you to prepare for the economic pain that’s building.

One, if you’re interested in owning physical gold — and particularly rare gold coins — give my friend and colleague Van Simmons of David Hall Rare Coins a call at 949-567-1325.

He’s simply the best… and he’s always willing to take time to share his wealth of knowledge in the world of numismatics with interested investors — no matter what your net worth may be.

Two, if you’ve never been on a gold-mine site visit, you need to check out this brand new video tour by our own Nick Hodge.

He’s calling it “America’s Next Biggest Gold Mine” and you’ll know why as soon as you watch it.

The company is developing a high-grade gold resource in the safe confines of Idaho, USA, and it’s currently trading undiscovered below US$0.50 per share.

The team on the ground there has already found 4 million gold ounces on their expansive property… and they’re drilling now to further expand that impressive resource!

Even if you don’t end up buying the stock, you’ll surely learn something new by hopping in the truck with Nick and exploring, first-hand, one of America’s most promising gold discovery and development projects.

Knowledge is wealth… so be sure to take the ride today.