I was a little bit surprised when I got a text message on my phone informing me that Aaron Rodgers had just sent me 0.00015825 BTC.

He recently revealed that he’s receiving a portion of his $134 million contract in bitcoin.

In an announcement on his Twitter feed, Rodgers said he was giving away $1 million in bitcoin to his fans. All people had to do was reply to his tweet with their $cashtag, #Paidinbitcoin, and follow @Cashapp on Twitter. 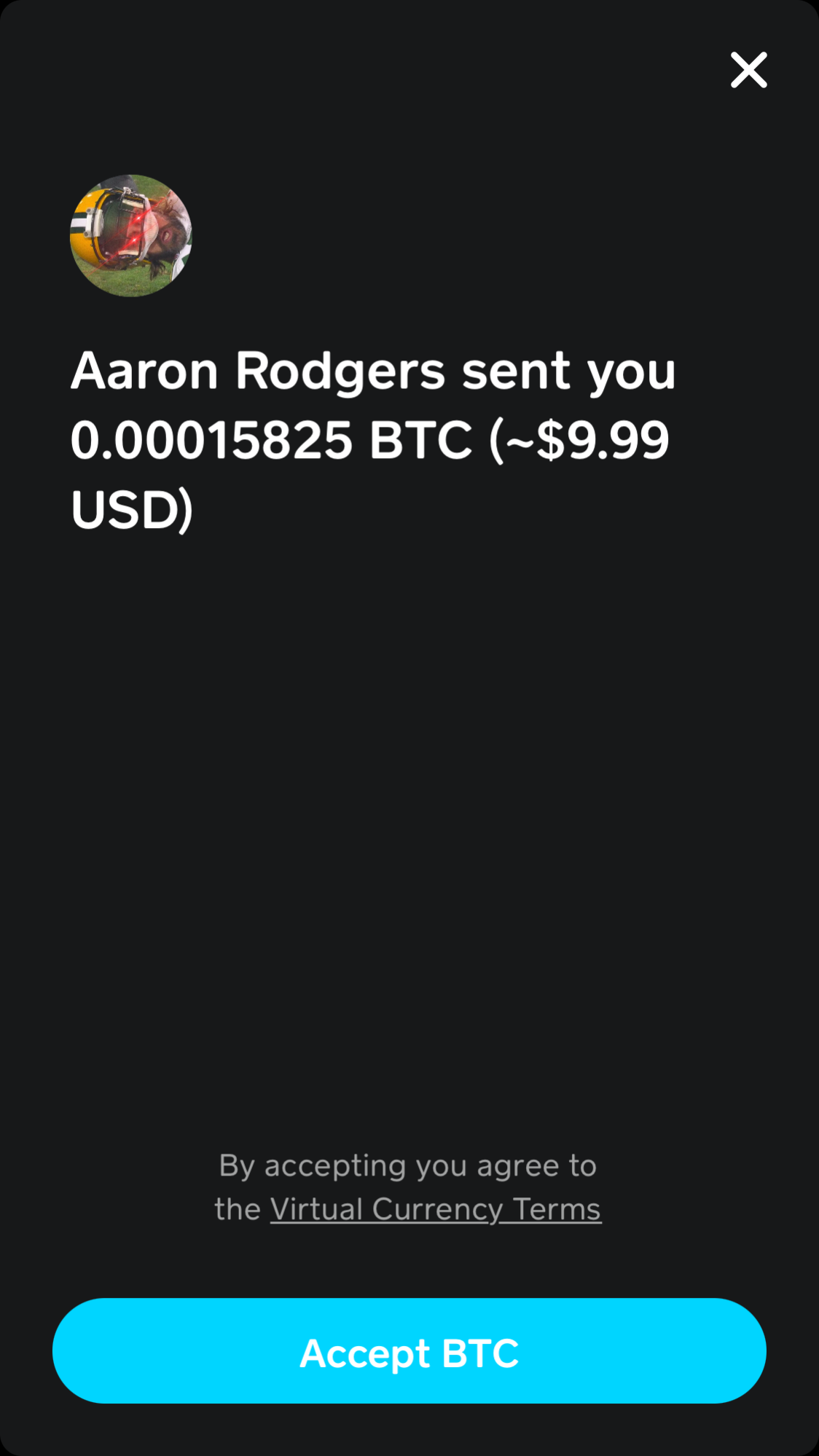 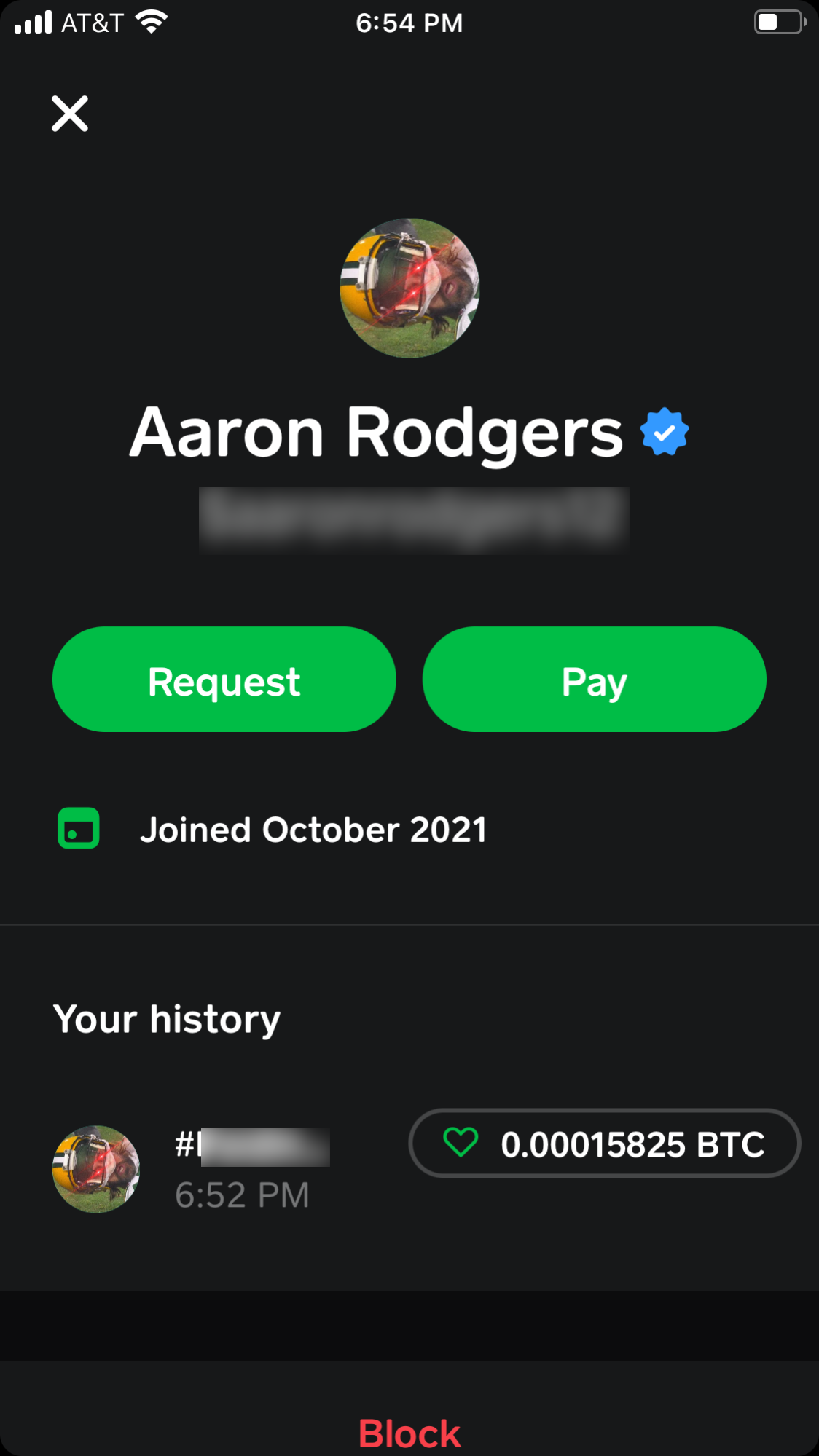 Who knows how much of this came out of Rodger’s pocket and how much was paid for by Cashapp as part of the promotion?

Needless to say, I participated without much hesitation and, sure enough, that same evening I received my bitcoin. Some people were reporting payouts of as much as $100 but I was happy to get my $9.99 worth.

“I believe in bitcoin & the future is bright.” Rodgers said on Twitter.

And he’s not wrong. Other NFL players have recently taken part of their salaries in bitcoin. This includes Russell Okung, Tom Brady, Saquon Barkley, and Sean Culkin to name a few.

The mayor of Miami, Florida just announced that he was receiving his entire paycheck in bitcoin.

Bitcoin is popping up all over the place and there are more and more platforms you can purchase it on. Cashapp is just one of many apps and payment services that allow you to send and buy bitcoin. Paypal (NASDAQ: PYPL) and Venmo are others that have recently joined the club.

Square (NYSE: SQ) is developing its own bitcoin mining system.

And Twitter (NYSE: TWTR) has recently released a feature that allows its users to tip content creators in bitcoin all without any geographical restriction and almost zero fees.

This is possible due to the Lightning Network. It’s kind of like an HOV lane on the highway. It uses smart contracts to create networks that allow bitcoin to be sent quickly and inexpensively.

Normally bitcoin is too slow and expensive to be used for small transactions. But with the Lightning Network, it can be used like digital cash — which was its original purpose after all.

New York City mayor-elect Eric Adams is as “pro-crypto” as they get. He wants to turn NYC into a hub for the crypto industry. He’s also planning on creating a city coin much like Miami did. The MiamiCoin that was launched back in August has already generated over $7 million in revenue for the city.

U.S. Senator Cynthia Lummis (R-WY) has long been an advocate for bitcoin. She has repeatedly spoken out in favor of US policy that would support and not hinder the burgeoning cryptocurrency industry. And she views bitcoin as a decentralized commodity — or “digital gold” — rather than a security.

More and more forward-thinking politicians are realizing the importance of creating a regulatory environment that will allow the US to be the global center of the crypto industry.

Much like we led the way with the Internet in the 1990s, America can’t miss out on the opportunity to lead in this space going forward.

And there will be continued opportunities for crypto profits as that plays out. We’ll be leveraging them in my new premium publication, Crypto Cycle, which will be available soon and track a real-money $50,000 crypto portfolio.