I hope you had a fantastic Labor Day Weekend.

We are getting right back to it here with an acquisition out of the gate.

One of our portfolio companies called Azarga Uranium (TSX: AZZ)(OTC: AZZUF) has had a takeout offer at 71-cents.

This is a company that has a uranium asset here in the United States in South Dakota called Dewey-Burdock. It recently cleared all its federal permitting hurdles. It's reached all its milestones to become one of the next developed in-situ uranium assets in the country. And that's important for a couple of reasons.

One, in-situ means it's not a big hole in the ground like a conventional mine. In-situ means they dissolve the uranium under the ground and bring it up out of the ground in microscopic particles that they then take to a separate plant and reconstitute it into the uranium resource you know as yellowcake.

It's important because the world is now turning to nuclear reactors as a source of baseload electricity in this fight against climate change. We've said for a long time here at Daily Profit Cycle, and in our paid research, that nuclear power would eventually be turned to because it's not intermittent like solar and wind energy are.

Now here we are. It was supported under Trump. It's being supported again under Biden. It’s a rare thing that is enjoining bipartisan support in this hyper-partisan world that we live in.

That means the government will need domestic sources of uranium. And that's why it's important to have a pipeline of mines that are in the U.S. — so we don't get ourselves into the same situation that we did in the '90s and early 2000s with oil, where we were reliant on the Middle East for well over two thirds of our oil demand.

Right now we're over 90% reliant on other countries for uranium.

But mines we financed privately because we saw the writing on the wall are going to benefit from that figure starting to go the other way. 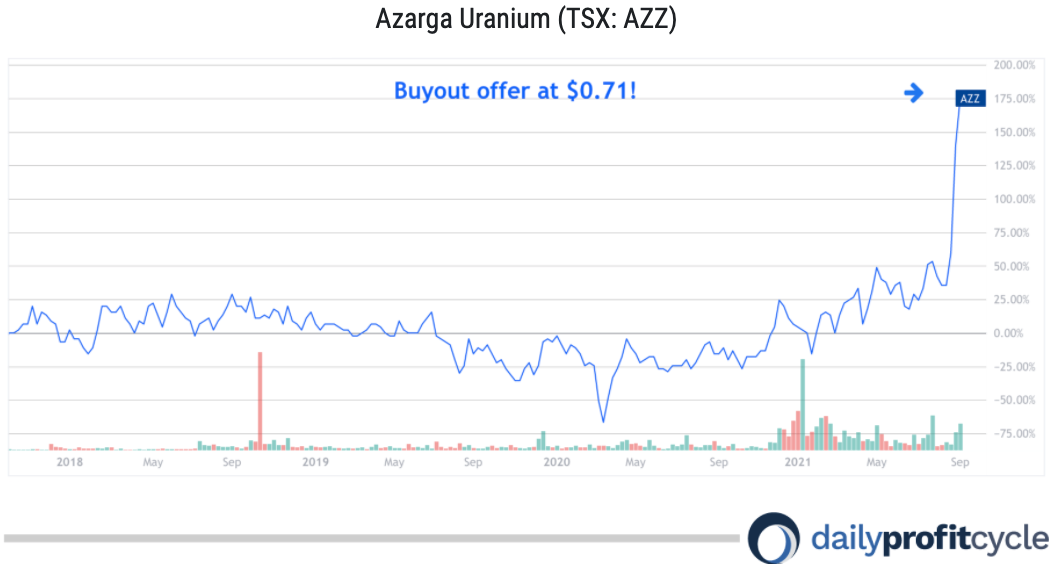 Gerardo recommended it at 25-cents.

We are clearly ahead of the curve. We've been pounding the table on uranium saying that it's clean... that it's safe… that eventually the environmentalists are going to love it…

That's happening now. And we're reaping the benefits in our accounts.

There's still upside here, not only in Azarga but in other uranium stocks as well. The deal's not done at 71-cents. It still has to close. It needs shareholder approval and another company could come in for a bid over the top and we could get a bidding war. Wouldn't that be fun?

Gerardo just made another uranium recommendation in his most recent issue of Junior Resource Monthly.

If you'd like to get a taste of his new uranium recommendation, you can check that out here.

The price of uranium itself has only gone from $20 or $25 per pound to $40 per pound — and these stocks are already popping off and getting bought out.

There's still a lot of room to go, and we've already got subscribers writing in congratulating us for the buyout offer in Azarga and for the recommendation that they were able to get in and make those sorts of returns.

If you want to see what Gerardo's planning next… check out his new uranium recommendation.

As a shareholder of Azarga, I'm certainly happy as well. Congrats to them and the team for getting a solicitation and acquisition offer on the table.

I think, like Gerardo does, that there's a lot more to come in this uranium bull market.

And we'll continue to play it with our network of contacts that we've built up over a decade to find the best new deals in the space, just like we did with Azarga.

We’re true insiders in the resource space. We’ve financed several companies that have gone on to get their permits, received buyout offers, or been taken out.

And we've reaped the rewards of that and so have our members to the tune of millions of dollars over the years.

So check out what's next for Gerardo and his latest uranium stock recommendation here.