And how those selloffs — until recently, at least —  hadn't been an indication that things were changing.

But now, as I'll talk about today, new market forces are afoot.

I've been telling you for the past couple of weeks that a rotation was at hand… That different sectors were leading the market like real estate and utilities.

That has turned out to be the case with utilities becoming a defensive sector as the collective market tries to figure out what's going on with these new market forces.

Those new market forces include strength in the dollar, which has pushed commodities like oil and copper down a bit.

Another important thing to watch is the 10-year bond yield. It's been doing battle with 1.3, which I've mentioned a couple of times as a key level. If it breaks down  and maintains below that yield… it's good for things like gold, which do well when yields are low. And as the yields start to rise up, or if they remain above that level, things like gold don’t do as well. 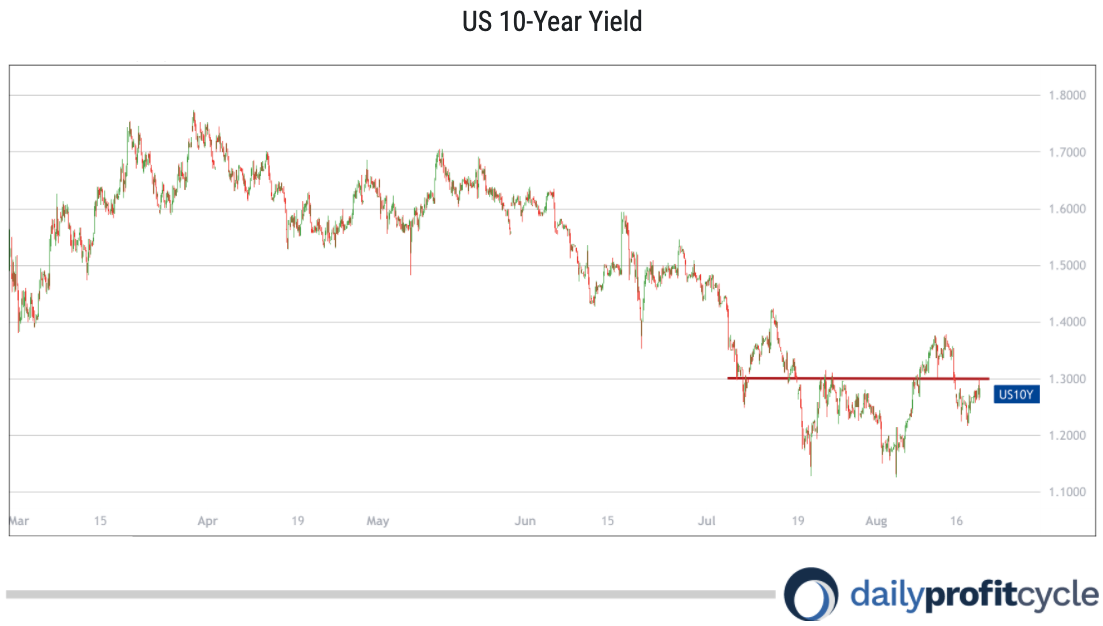 You'll see here that it's just bouncing around that line.

Same thing with the strengthening dollar — testing resistance at its level, something like 93, 94 on the DXY. It can't make up its mind, either. 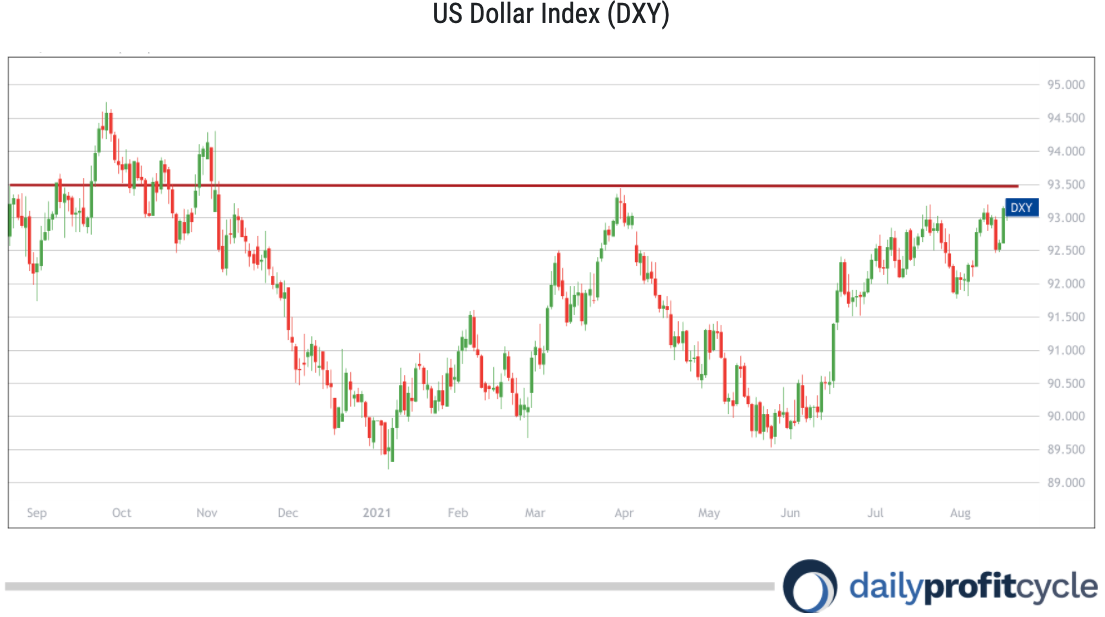 Not only is there light summer volume, but the market is likely also figuring out how to price in any economic and monetary fallout from rising hospitalizations and infections from the Delta variant.

If it slows down the economy enough that it can’t keep pace with inflation, you're not going to get the Goldilocks market that we've had, where seemingly everything goes up.

You're going to get a bit more of a defensive rotation… like you’re seeing now.

Exactly why I had premium members going into real estate and utilities over the past couple of weeks. (You can still get those recommendations. Check out the preview here.)

So, a couple of key points there, and then I'll wrap up…

You have to control the things that you can control. You can't control external things like 20-year failed wars and global pandemics and people's comprehension — or lack of comprehension — of basic science.

But what you can control and what you need to control is yourself, first of all. And also getting the bigger things right.

I've mentioned in these weekly market updates since I started them that there are bigger market indicators that can show you when changes in the market cycle are coming. It’s one of the reasons I named this newsletter Daily Profit Cycle.

You can’t just watch the stock market. The bond market is much bigger. The gold market is important. Currencies are important.

And if you can get the direction of those big things right, you can get moves and timing right in the market such that you can rotate into sectors that are becoming favorable.

I was talking a lot about energy in the first six months of this year, and now I'm talking about real estate and utilities more because they've become the sectors that are starting to outperform — given the conditions that are materializing in front of us that I just ran through.

But then you have to drill down inside of those sectors to find individual plays, which of course is where you get more torque — or leverage or alpha — once you get the bigger things right.

If these bond yields are breaking down and I think that gold and silver are going back into a bull market or a rising price environment, I can do a couple of things...

But really where I've made my money and helped people make the most money is not only getting those bigger moves right… but speculating within trends for five to ten times your money.

Again, I'll buy the large gold companies. I was writing here recently about how I was starting to buy into Kinross (NYSE: KGC), for example.

But then I want to take some shots, right? I want to take some speculative shots on junior miners, explorers and developers with share prices under a dollar, often under 50 cents, that have a chance to grow or increase by multiples as they not only execute on their plan, but the macro market is in their favor.

That's why I've been doing a bit of silver prospecting, as you might've heard.

I recently went underground in a silver mine here close to Spokane in the historic Silver Valley, where 1.2 billion ounces of silver has already come out of the ground.

And I brought a video guy with me to record not only the mine and the underground itself, but to get some interviews with management. That’s some of the due diligence process that I conduct when looking at these smaller companies.

This is a small 75-cent silver company that I helped finance privately. That I got private members — high net worth members — in at 25 cents. They've already tripled their money.

This silver stock just IPOd, and has a very high grade asset in one of the best silver mining jurisdictions in the world. And it's continuing to add key members and key assets to their portfolio.

That’s how you drill down into sectors once you identify the larger trend. That’s how I look at markets and how I do diligence within those sectors and at different risk levels with different-sized companies.

Small silver companies in the past, like Silver Standard and others, have gone up thousands of percent from the 50 or 75 cent level as they continued to build out their businesses.

If you want to see the tour I just went on, click here.